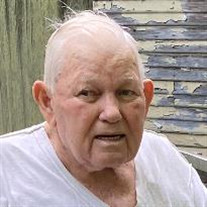 Roy Bradford Ward was born April 2, 1933, to Alfred Lincoln Ward and Ethel Estella (Looper). He left this world on March 11, 2022, at the age of 88 years 11 months, and 10 days old. He married the love of his life, Dorothy on August 18, 1951, and they shared 61 memorable years together. He served as the Board Chairman on Turley Water for about 17 years. He loved his church and church family very much and never missed unless he absolutely had to. He leaves behind a lot of memories for all to cherish forever. Roy was preceded in death by his wife, Dorothy; parents, Alfred and Ethel Ward; son-in-law, Edward Patton; grandson, Eric Ward; grandson Edward Patton Jr.; daughter-in-law's, Belinda and Elizabeth Ward, and many more relatives. He is survived by his 3 sons, Brad Ward, Randy Ward, and David Ward; his daughter, Debbie Patton; 5 grandchildren, Amanda, Andrew (Sheila), Sheena (Joachim), Katie, Rachel (Josh); 9 great-grandchildren, Allyson, Grace, Hannah, Hollie, Olivia, Remmie, Emily, Joseph, Jameson, and Jackson; brother, George Ward; sister, Loma McGee and numerous other family members and friends. To view the service via webcasting please use the link below: http://webcast.funeralvue.com/events/viewer/70895/hash:38B571A5D6403507

The family of Roy Bradford Ward created this Life Tributes page to make it easy to share your memories.

Send flowers to the Ward family.