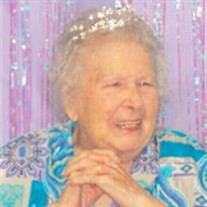 Dobbs — Ruby Mae, 93, passed away October 10, 2012 at the Golden Living Center, Gamma Rd. Lodge, in Wellsville, MO.Â  She was born April 21, 1919 in Watson, IL to Jessie Velora (Brown)Arney and Chester Winfred Arney.Â  She graduated from Stephen Decatur High School in Decatur, IL.Â  She worked for the Signal Depot in Decatur and as a cafeteria worker for Tulsa Public Schools in OK.Â  At PennWell Publishing Co., she worked in the book department. She was a member of the Military Order of the Purple Heart Ladies Auxiliary in Tulsa, OK.Â  She enjoyed many years of activities with the Glenpool(OK) Senior Citizens.Â  Since 2010, she had been a resident of the Golden Living Center, where she enjoyed Bingo and musical performances, especially those of “Elvis”.Â  She is survived by:Â  her daughters, Imogene (Robert) Clymore of Jenks, OK, Linda (Loren) Stroup of Middletown, MO, and Nancy Fisher of Tulsa, OK; 4 grandchildren, Annelisa Goodman, Rick (Michelle) Stroup, Kelly DeBolt, and Holly Clymore; great-grandchildren, Brianne (Jason) Beach, Brittany, Braden, and Brooke Stroup, and Rebekah Goodman; great-great-grandchildren, Aiden, Alyssa, and Ashlyn Beach; and numerous beloved nieces and nephews.Â  Preceding her in death were her husband, Eugene Ralph Dobbs, her parents, and her brothers, Orban, Herschel (Jake), and Charles (Chuck) Arney. She was loved and admired by many friends and family who will miss her sweet disposition.Â  We know she is rejoicing in Heaven with those previously departed loved ones.Â  Funeral service Tuesday, October 16, 12:30 p.m. at Floral Haven Funeral Home, 918-252-2518.

The family of Ruby Mae Dobbs created this Life Tributes page to make it easy to share your memories.