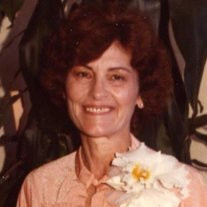 Ruth M. Scholes, 84, died on September 9, 2013 after a long struggle with Alzheimer’s Disease. Ruth was born on April 23, 1929 in Seminole, Oklahoma to Charles Yocham Spradling (1896-1947) and Helen Nelson Spradling (1900-1983). She graduated from Wolf High School in 1947. Ruth and her husband, Bill, were married 44 years and made their home in Oklahoma, Texas, and Canada through the years. In her early years, Ruth and her best friend owned a dress shop in Bixby, Oklahoma. Later, Ruth did secretarial work for several companies and a doctor’s office. Ruth also enjoyed exploring and collecting sea shells, rocks and antiques as she and Bill RVed across the country before and after retirement. Ruth is survived by her husband, Bill of Broken Arrow; one daughter, Debra Brooks Richardson Conley, of Tulsa; two step daughters, Lisa Scholes Cole (Mike) of Tulsa and Peggy Scholes Nikkel (Lynn) of Casper, Wyoming; one step son, David Scholes (Cathy) of London, Arkansas; eleven grandchildren, sixteen great grandchildren, one great great grandchild; one sister, Kathryn Williams, of Tulsa; one aunt, Mary Nelson, of Tulsa; and scores of nieces, nephews, and friends. Her quick wit and bright smile will be missed by all. A memorial service will be held on Saturday, September 14th at 10:00 AM at the Floral Haven Funeral Home Chapel located at 6500 S. 129th E. Ave. Family and friends are invited to join the family for a time of fellowship following the service at the Floral Haven Family Center. Memorial gifts may be made to Cornerstone Hospice, 10816 E. Newton St., Ste. 117, Tulsa, OK 74116.

The family of Ruth M. Scholes created this Life Tributes page to make it easy to share your memories.