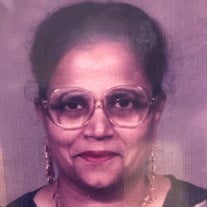 Saeeda Akbar went home to be with Jesus on March 6, 2021, at the age of 85. She was a beloved wife, mother, grandmother, great-grandmother, and Godly woman that will be remembered forever in the hearts of the many people she touched during her lifetime. Saeeda was born to Charles and Esther on December 16, 1935, in Lahore, Pakistan, and was raised alongside her two sisters and two brothers. During her later schooling years, Saeeda excelled to become the top female athlete in all of Pakistan and went on to qualify for the Asian Olympics. She went on to complete her Bachelor's Degree in Pakistan and received her Master's Degree in Health, Sports, and Recreation at the University of Southern Mississippi. Saeeda was introduced to her husband, Robin Akbar, through her parent's arrangement. Robin was an accomplished physics teacher at the time. Saeeda accepted her father's marriage proposal to Robin and they were happily married on December 16, 1970. They went on to have two children, Nighat and Saeed. In addition to being a dedicated wife and loving mother, Saeeda also loved being involved in fulfilling God's calling in her life as a prayer warrior. Throughout her entire life, she held an unwavering faith in God, which she shared with those who surrounded her. Saeeda joins her parents, Charles and Esther, her eldest two sisters, Hamida and Famida, and brother, Habib, in Heaven. She is survived by her husband, Robin, her youngest brother, Shahbaz, her children, Nighat and Saeed, her grandchildren, Jasmin, James, Diamond, and John, and her great-grandchildren, Avan and Zara. Philippians 4:6-7 Be careful for nothing; but in everything by prayer and supplication with thanksgiving let your requests be made known unto God. And the peace of God, which passeth all understanding, shall keep your hearts and minds through Christ Jesus. For those that cannot attend the service in person, we will be webcasting the service at the following link: https://webcast.funeralvue.com/events/viewer/49774/hash:7B495A387C0991B1

Saeeda Akbar went home to be with Jesus on March 6, 2021, at the age of 85. She was a beloved wife, mother, grandmother, great-grandmother, and Godly woman that will be remembered forever in the hearts of the many people she touched during her... View Obituary & Service Information

The family of Saeeda Akbar created this Life Tributes page to make it easy to share your memories.

Send flowers to the Akbar family.