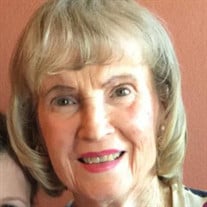 Salem East, loving wife, mother, grandmother and great-grandmother, age 88, ran into the arms of her Father on March 30th, 2020 in Tulsa, OK. Salem was born October 9, 1931 in Loris (Horry County), South Carolina. She was the 10th child of 13 children born to Rosa Stevens Russ. She grew up on her family’s tobacco farm and told many quite interesting stories of her time there as a child. She graduated from Loris High School. She married the love of her life, Milton East, Jr. on September 25th, 1954 in Charleston, South Carolina whom she met while he was stationed in the US Air Force there. They moved to Tulsa, Oklahoma in 1957, where they began their family and careers. Salem lost her mother at the age of nine. Her older siblings stepped in to care for her, but also had a great deal of love support from other families in the community. Salem learned a great deal about showing good southern hospitality from these mentors, and everyone who knew her experienced that kindness. Salem had an extremely high work ethic, and began working as a teenager. Eventually, she managed several retail stores during her career. She was known for her eye for fashion and often had the opportunity to dress television personalities, pageant contestants, and other prominent community figures. She participated in local fashion shows on several occasions, often in coordination with Tulsa Christian Businesswomen. She was an active member at their church home of over 35 years, Woodland Acres Baptist Church, and enjoyed singing in the choir for many years. Salem is survived by her husband of 65 years, Milton A. East, Jr., three daughters and three sons-in-law, Brenda East Samuels and Scott Samuels of Euless, Texas; Angela East Diehl and Douglas Diehl of San Antonio Texas, and Pamela East Arroyo and Charles Arroyo of Broken Arrow, Oklahoma. In addition, she is survived by seven beloved grandchildren: Michael Samuels and his wife Brooke, Jordan Diehl and his wife Cassey, Cameron Diehl and his wife, Amanda; Summer Wyers and her husband, Dustin; Shelby Cady and her husband, Alton; Sophia Arroyo, and Chloe Arroyo. She is also survived by ten great grandchildren: Tommie and Mollie Samuels; Everly and Axel Diehl, Kayleigh and Hayes Diehl; Isabella, Presley and Grayson Wyers; and Adeline and New Baby Cady. She is also survived by three sisters, Loye, Hazel and Mazel of South Carolina as well as several nieces and nephews. While Salem loved flowers, she loved people more. Instead of floral gifts, the family requests would like to request that donations be made in her name to two very special organizations. Memorials in Salem’s honor may be made to: Season’s Hospice 6532 W 71st Street, Suite 101 Tulsa OK 74133 seasonshospice.com Woodland Acres Baptist Church 5511 South Harvard Tulsa OK 74135 Service Information: Viewing will be held this Friday, April 3rd from 10am-6pm at Floral Haven Funeral Home in Tulsa. Due to mandated restrictions, services will be live-streamed on Monday, April 6th at 12:30 pm http://webcast.funeralvue.com/events/viewer/26767 through Floral Haven. A Celebration of Life gathering will be held at a later date; details to follow.

Salem East, loving wife, mother, grandmother and great-grandmother, age 88, ran into the arms of her Father on March 30th, 2020 in Tulsa, OK. Salem was born October 9, 1931 in Loris (Horry County), South Carolina. She was the 10th child of... View Obituary & Service Information

The family of Salem East created this Life Tributes page to make it easy to share your memories.

Send flowers to the East family.