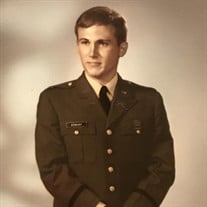 Lt. Col. Samuel H. Asbury, III Lieutenant Colonel Samuel Homer Asbury, III, age 75, of Norman, OK, died peacefully on October 7, 2020, in the presence of his three daughters at the Claremore Veteran's Center. He was born to Sam H. Asbury, II, and Hope Lambert Asbury on August 13, 1945, in Kansas City, MO — a time when, his mother said, the hospital was almost empty because news of World War II's imminent end had set off early celebrations everywhere. He grew up in the heart of Oklahoma City’s Heritage Hills neighborhood where he formed lifelong friendships and was a graduate of Classen High School. He earned his Bachelors of Science at OSU and his MBA at Central State College. He entered the Army Reserve Officers' Training Corps. After being called up, he completed his basic training at Fort Bragg, NC, and was deployed to South Vietnam. He bravely served two tours of duty from October 1968 to October 1970, during which time he earned the nickname "The Fighting Lieutenant." On April 11, 1970, his competence and skill were decisive factors in the defense of the Phu Long Compound from enemy attack. In recognition of his heroic actions, he was awarded a Bronze Star. (And as he was fond of repeating, the colonel who pinned the medal on his combat fatigues had said: "Asbury, if you had been killed, this would have been a Silver Star.") By the end of his service, he had earned a second Bronze Star as well as the Vietnamese Gallantry Cross. Sam loved the great outdoors, especially camping, hunting, and fishing. He was a life long learner. Later in life, he went on to finish at the top of his Police Academy class in Central Arizona with the highest GPA and weapons proficiency scores.. Sam III, The Fighting Lieutenant, was preceded in death by his parents, Hope and Sam II. He is survived by his brothers: Stephen and John; his daughters: Stephanie, Amy, and Amanda; his grandchildren: Graham, Louis, Emilia, and Lyla. A memorial service in his honor will be held at 1:00 pm May 28, 2021 at Fort Gibson National Cemetery. In lieu of flowers, donations may be made in his name to the Claremore Veterans Center. Please checks payable to "CVC Veterans donated funds" and mail to Claremore Veterans Center, P.O. Box 988, Claremore, OK 74018-0988.

The family of Samuel Homer Asbury III created this Life Tributes page to make it easy to share your memories.

Send flowers to the Asbury family.