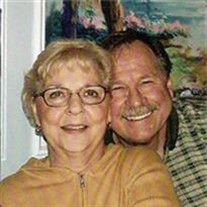 Turgeau — Sandra â??Sandyâ? Lee, beloved wife, mother, and grandmother passed away on Friday, June 3, 2011. Born September 23, 1947 in Indianapolis, Indiana, she moved to her home, New Orleans, Louisiana as an infant. Sandra married Arthur â??Archieâ? Turgeau of New Orleans, Louisiana on February 17th, 1964 in New Orleans.Â She was mother to four children; Vickie, Beth, Shaula, and Brian. Â  Sandra had a long career with J.C. Penney in various roles throughout different department stores and the Corporate Buying Office in New York.Â She retired in 2006, after 33 years with the company.Â Throughout her life she enjoyed crafting, sewing, and cooking.Â She loved her role as wife and mother, but often said there was nothing better in life than spoiling her grandchildren.Â Without a doubt, her grandchildren were adored by her, and were her ultimate joy in life. Sandy had an infectious smile and contagious laugh.Â She possessed a generous spirit and willingly gave of herself.Â She never met a stranger, made friends everywhere she went, and had a way of making everyone feel at home in her presence.Â She will be dearly missed by all who knew her. Â  She is preceded in death by: her father, Clarence â??Dickie-Boyâ? Chamberlin; Mother, Stella Chamberlin; and Brother, Richard â??Butchâ? Chamberlin.Â Sandra is survived by her husband of 47 years, Archie, and Sandra was the love of his life.Â She is survived by her beloved children: Vickie, and her husband, Mike Blair; Beth, and her husband, Dale Powers;Â Shaula, and her husband, Barry Cochrane; Brian Turgeau, and his wife, Stacey.Â Â  Sandraâ??s heart belonged to her grandchildren: Jeffrey Turgeau; Kyle, and Micheal Blair; Morgan and Hunter Powers; Spencer and Mason Cochrane; Casey Turgeau; Madison and Cole Turgeau; Ellyssa, Charlotte, and Alex Sager; and Caleb Turgeau.Â In addition she is survived by brothers Bruce and Ronald Chamberlin. Â  A memorial service will be held for family and friends on Saturday, June 11. Open visitation will be 1:00 to 3:00 pm, Memorial Service will begin at 3:00 pm. St. Bernard Funeral Home 701 WestÂ Virtue St. Chalmette, Louisiana 70043

The family of Sandra Lee Turgeau created this Life Tributes page to make it easy to share your memories.