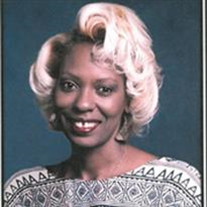 Sandra Lee was born to Doreathea Mae Fowler and Jesse Jones in 1945 in Kansas City, MO on September 21. She later moved to Tulsa, OK, where she attended, like most African Americans in Tulsa in this era, Dunbar Elementary, Carver Middle, and Booker T. Washington High, where she excelled in her studies. She met her husband Howard Ray the summer of 1960 and married on October 25, 1963. With this union they produced four lovely children. Sandra Lee worked for Saint Johnâ??s Medical Center as a Certified Nurseâ??s Assistant where she retired in 2001 after 30 years of service. Sandraâ??s passion was tending to her precious foliage (plants) and cooking down home meals for her family to enjoy.Â  Her salvation was established at an early age at Mount Rose Baptist Church under the leadership of Pastor A.D. Phillips. Upon marriage, she moved her membership to Greater Mount Carmel Baptist Church where she served as a Deaconess and the Social Chair working as a faithful servant in the church kitchen.Â  Sandra Lee Williams was truly blessed with a loving family, true friends, and a huge heart; she never met a stranger. She is known as Sam, Wife, Momma, Sister, and G-Ma.Â  She leaves on this earth in Godâ??s care a loving and devoted husband, Howard Ray Williams, daughter, Sonyia LaTreace (John Thomas Smith), son, Derrick RamondÃ© (Carla Patrice) of Irving, TX, daughter Angelica Marie, daughter Nicol Jacoline, sister Peggy Lee (Eaton McKinley) of Fort Worth, TX, brother, L.T. Stanley, Jr. of Los Angeles, CA, and an aunt (sister of her mother) Zora Pennington. Sandra only had six grand-children; Johnisha LaShawn, Derrica Nicol, Effrom Howard, Darria Christine, Nicolos Ray, and Elijah Lorenzo. She also leaves sister-in-laws, Joan Williams Bland and Angela Atkins, and a host of nieces, nephews, cousins, and true friends.Â  God granted Sandra Lee her last breath on Sunday morning, August 7, 2011, about 9:58 a.m. Her body is out of suffering, sin, and sorrow and her soul is now at ease with her Heavenly Father. She was preceded in death by her father, Jesse Jones, mother, Doreathea Mae, and sisters Mary Kathrine and Janis Lanora.

Sandra Lee was born to Doreathea Mae Fowler and Jesse Jones in 1945 in Kansas City, MO on September 21. She later moved to Tulsa, OK, where she attended, like most African Americans in Tulsa in this era, Dunbar Elementary, Carver Middle, and... View Obituary & Service Information

The family of Sandra Lee Williams created this Life Tributes page to make it easy to share your memories.

Sandra Lee was born to Doreathea Mae Fowler and Jesse Jones in...