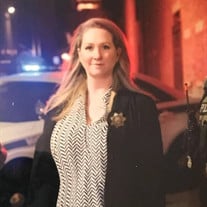 Sarah Juliann Vas Spradlin Sarah passed away on December 7, 2021, after a brief illness caused by a compromised immune system. Sarah was born May 12, 1975, to Susan Jane (Mitchell) Vas and John S. Vas II in Oklahoma City, Oklahoma. She began an eight-year career in gymnastics at age four competing with the Metro Gymnastics Club of Oklahoma City. Sarah attended James L. Dennis elementary school followed by attendance at Hefner Junior High School where she was a member of the Cheerleading Squad and played on the golf team. Sarah attended Putnam City North High School where she was a member of the Cheerleading team and played volleyball and was a competitive diver for the swim team. Following high school, Sarah attended Central State University for one year, then she moved to Tulsa and attended Tulsa Junior College receiving an Associates’ degree in Criminal Justice. At the age of 21, Sarah joined the Tulsa Sheriff’s Department where she served 3 years. Sarah continued her education, receiving a Bachelor’s degree from Northeastern State extension in Tulsa while working for TSD. Upon receiving her Bachelor’s degree Sarah applied to, and was accepted by the Tulsa Police Department where she served for over 22 years. Her duties included working as a hostage negotiator with the TPD SWAT team, Detective with the family violence department but what she really enjoyed was the day-to-day contact with the people in the neighborhoods she traveled as a patrol officer. Sarah is survived by her parents, Susan and John Vas II of Oklahoma City; Her brother John S. Vas III of Olathe, Kansas; her daughter, Olivia Claire Spradlin; son, Ericsson John Spradlin; husband Eric Spradlin; Mother-in-law, Phillis Sires, Father-in-law, Terry Spradlin and his wife Mirai Spradlin. Sarah had numerous aunts, uncles, cousins, and various other family relations, all of whom she cherished. She was loved by many and will be missed by all. In lieu of flowers, memorial contributions may be made to Tulsa Police Officers' Memorial www.tpdmemorial.com Memorial service will be 1:00 PM, Friday, December 17, 2021, at Cedar Ridge Christian Church, Broken Arrow, OK.

The family of Sarah Juliann Spradlin created this Life Tributes page to make it easy to share your memories.

Send flowers to the Spradlin family.