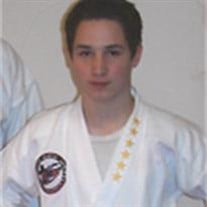 Sean Michael Creekpaum, 15 passed away Sunday, June 19, 2011.Â  He is survived by his loving family; grandparents, Michael & Sherry Randall, his sister Jade, his father, David Creekpaum and wife Connie, his grandmother Connie Wilson, and his grandfather, Glenn Bartley, and many aunts, uncles, cousins, and many friends.Â  He was preceded in death by his loving mother, Tami Lynn., great grandparents, Floyd & Dorothy Bowman, Thomas & Norman Bartley, Marvin & Pauline Randall, CG & Maxine Martin.Â  Sean was truly one of a kind.Â  His determination, focus and abilities were absolutely astonishing for someone of his age.Â  He was a TKD 2nd degree blackbelt,Â working toward his 3rd degree at Martial Arts Academy under instruction by Mr. Chris Velez and Mr. Rick Gibson and he truly loved being there.Â  He also did mixed martial arts and had three kickboxing bouts which he won all three, two by TKO in Arkansas.Â  In 2005, at the age of 9, he participated in the winter nationals in Dallas, TX, where he won his national Championship.Â  He loved his martial arts family and was truly a great little warrior.Â  Sean was a member of the Tulsa Police Explorers Program with his friend Hunter Pate, which he thoroughly enjoyed.Â  He was also an avid â??gamerâ? on his XBOX and was great at that also.Â  He was asked by his internet gamers if he was in the military because he was so good at it and he said â??no man, Iâ??m only 13â?.Â  They were astonished at that.Â  He was looking forward to going into the military after high school.Â  He was trying to decide if he was going to be an Army Ranger or a Navy Seal.Â  Sean would have made a great leader, with his cool head and always handling the situation with confidence.Â  This country will be poorer without his Leadership ability.Â  He was loved by many and will be greatly missed by all.Â  A celebration of his life will be held at Floral Haven Funeral Home Chapel on Friday June 24, 2011 at 12:30 P.M.Â  (918)252-2518

The family of Sean Michael Creekpaum created this Life Tributes page to make it easy to share your memories.