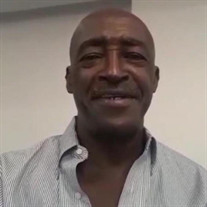 Selwyn Joylon Barrington McLean was born on May 2nd 1963 to parents Rudolph and Yvonne McLean in Peter’s Hall, Guyana, South America. His love and obsession for an abandon row boat earned him the name “Captain” at a young age and he was loving known as such by all. Captain attended Peter’s Hall Primary School, and when he was of age joined the National Service then in later years The People’s Militia, however that was not his passion. He was enthused with the operations of machines and went on to learn heavy duty mechanics with Buddy Hassan. In his mid to late 20s, Captain was employed with Georgetown Seafood Limited as a marine mechanic repairing trawlers and later a Deckman on a fishing trawler at sea. He began to live his best life, enjoying the best of both his worlds ~ his love for water and his passion for mechanical repair. At the age of 31 he suffered a stroke that paralyzed his left arm and halted his career. The physical setback did not stop Captain’s passion and devotion to mechanics, as he became the “go-to” consultant for family and friends. Captain emigrated from Guyana to the USA in 1994, and resided in Brooklyn New York and relocated to Tulsa Oklahoma in 2000. Over the years he worked for VIP Limo and was a current employee of Tulsa Public Schools at the time of his eternal rest. Captain’s jovial personality will forever live on in the memories of his love ones. Children: Roderick (Kenica), Jamal, Joshua, Justin, Jocelyn and Houston. Grandchildren: Roderick Jr., Ricardo, Ricaro and Jazaria Brothers and Sisters: Claudette, Ingrid, Edward (Cheryl), Marjorie, Ann, Rodwell (Grace), Winston (Jennifer), Lennox (Dawn), Nuru Sonia (Paul). Nieces and nephews: Marcia, Amanda (Eon), Mark (LaShena), Michael (Fannis), Michelle (Dale), Mayonne, Andy (Elizabeth), Shannon, Eifion, Theo, Ceíli, Rhonda (Tristian), Candacy (Chris), Winston Jr. (Affeana), Eric, Johnny, Kevin, Joyann, Joshua, Elijah and Joel. Great nieces and Nephews: Marissa, Maya, Sarah, Sydney, Emani, Tatiana, Micah, Mark Jr., Emmanuel, Emma, Saxton, Nevaeh, Zara and Aiden. Adopted sister: Waxie Garns Aunt and Uncle: Lela George and Ian McLean. His wonderful friends “his boys”: Chris, Greg, Andrew, Boyd, Lesley Allen, Forde, Monty, Bones, Jack, Volly, Noel, Paul and Gordon (Tall Man). A host of cousins and family: The McLean’s, Hickerson’s, George’s, Francois’, Bristol’s, Lee’s, Sparman’s, Blackmon’s, Chungs’ & Lyttle’s Preceded in death by his loving parents Rudolph and Yvonne. May he rest in eternal peace. ***FOR THOSE THAT CANNOT ATTEND THE SERVICE IN PERSON, PLEASE COPY AND PASTE THE FOLLOWING WEB ADDRESS IN YOUR BROWSER OR CLICK ON THE LINK: THE LIVE STREAM WILL START AT APPROXIMATELY 12:15 PM. IF YOU DO NOT SEE THE LIVE FEED, PLEASE REFRESH THE PAGE UNTIL IT APPEARS*** http://webcast.funeralvue.com/events/viewer/61576

Selwyn Joylon Barrington McLean was born on May 2nd 1963 to parents Rudolph and Yvonne McLean in Peter&#8217;s Hall, Guyana, South America. His love and obsession for an abandon row boat earned him the name &#8220;Captain&#8221; at a young age... View Obituary & Service Information

The family of Selwyn Joylon McLean created this Life Tributes page to make it easy to share your memories.

Selwyn Joylon Barrington McLean was born on May 2nd 1963 to parents...

Send flowers to the McLean family.