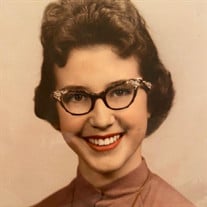 Sharon Silcott Moody, 81, of Broken Arrow, passed away December 24, 2020, at home in the loving care of her family. She was born October 26, 1939, to Philip Waldo Smith and Kathryn Virginia (Kerr), in Columbia, Missouri. She graduated from College High School in Bartlesville, Oklahoma in 1957. After completing her nursing program at St. Luke’s School of Nursing in Kansas City, Missouri, she married her high school sweetheart, Earnest Joe Moody on August 27, 1960. The couple made their first home in Tahlequah where Joe attended Northeastern State University and Sharon worked at Tahlequah City Hospital. The Moody’s moved to Pryor, Oklahoma in 1961 where Sharon initially worked as a nurse at Grand Valley Hospital and later was the school nurse for the Pryor school system. Many a student will remember getting an eye screening, and immunization, getting checked for head lice, attending a sex education class, or just having a good conversation with Nurse Moody. She and Joe remain legends of the Pryor Schools, where Joe also taught carpentry and later was the maintenance superintendent. Sharon and Joe were avid travelers, taking their daughters Janet and Linda on RV trips throughout the United States. Camping was a great family past-time, often with other families and relatives. Sharon enjoyed sewing and crafting and was particularly proficient at fine detail painting. She and Joe were sought-after artists at craft shows throughout northeastern Oklahoma. In later years, Sharon and Joe moved to Broken Arrow to be closer to their 5 grandchildren. They attended sporting and school activities of all sorts. They continued their traveling and were members of the Good Sam RV club. Sharon is proceeded in death by her parents and a son-in-law, Jeff Potts. She is survived by her husband; daughters Janet Potts and Linda McGraw (Greg), of Tulsa; grandchildren Amanda Potts Cooper (Luke), Samantha McGraw Huie (Ty), Jolee Potts, Madison McGraw, and Kyle Potts; great-granddaughter Olivia Cooper, and great-grandson Keller Damon Huie. A viewing will be Tuesday, December 29th from 4:00 p.m. to 6 p.m., and services are set for 10 a.m. on Wednesday, December 30, 2020, at the Floral Haven Chapel, 6500 S. 129th E. Avenue, Broken Arrow, OK with a private internment following. Properly-worn (over the mouth and nose) masks will be required, and social distancing should be observed at all times. In lieu of flowers, the family asks that you make donations to St. Jude Children’s Research Hospital (stjude.org) or to your favorite charity. Webcasting of the service will be available at the following link: http://webcast.funeralvue.com/events/viewer/43720/hash:5F31F6EE7610DF7A

Sharon Silcott Moody, 81, of Broken Arrow, passed away December 24, 2020, at home in the loving care of her family. She was born October 26, 1939, to Philip Waldo Smith and Kathryn Virginia (Kerr), in Columbia, Missouri. She graduated from College... View Obituary & Service Information

The family of Sharon Moody created this Life Tributes page to make it easy to share your memories.

Send flowers to the Moody family.