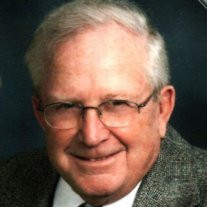 Sherman F. Gray, 83, of Bixby, died Friday, November 22, 2013. He was born on September 12, 1930 in Jones, Oklahoma, the son of Joseph and Mary Gray. He served in the United States Army during the Korean War from 1951-1953, attaining the rank of Private First Class. He was a truck driver in the military, delivering food to his fellow servicemen, in companies A, B, C, & D. He was a member of the 150th Gun Battalion Headquarters Battery. Throughout his life, Sherman enjoyed bowling, fishing, and hunting, yet he was best at being ornery. He was a funny man, known for his witty sense of humor. He always knew how to bring a smile to your face, whether by a silly song or a clever quip, he always knew how to make you laugh. He taught all of us to never take life too seriously. He was a people person. Children were especially drawn to him. The neighborhood kids liked to come over to his house and visit him on a regular basis. He liked to take daily walks and sit on his porch to oversee the “goings on” of the neighborhood. He loved sports, especially the St. Louis Cardinals. Sherman was a fan of old westerns and enjoyed watching Gunsmoke, when he wasn’t on “neighborhood watch”. On January 31, 1954, he married Charlene Carll, the love of his life. They enjoyed 59 wonderful years as husband and wife. He had worked as a machinist all of his career. Sherman is survived by his wife, Charlene, two daughters, Christi Neal, and her husband, Curtis, aka “Cletis”, and Gayln Zajic, and her husband, Andy, four granddaughters, Karen, Cathy, and her husband, Darrick, Sara, and Andrea, and her husband, Scott, seven great-grandchildren, Becca, Baileigh, Taylor, Jordan, Lucas, Nathan, and Weston, sister, Connie, and beloved pet cat, Vanilla, and numerous other family members and friends. He was preceded in death by his parents, two sisters, Selma and Corky, and one brother, Gene. Memorial donations may be made in Sherman’s name to Christ United Methodist Church, 3515 S. Harvard Avenue, Tulsa, Oklahoma 74135.

The family of Sherman Floyd Gray created this Life Tributes page to make it easy to share your memories.