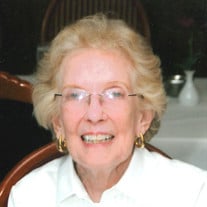 Shirley Grace Steele Dalton, 90, of Tulsa, OK, died peacefully at home on March 4, 2020. Shirley was born at home in Dalton, Whitfield County, Georgia, August 20, 1929, the second child of William Earl and Grace Sansom Steele. Her father secured WPA work for the Tennessee Valley Authority which took the family north across state lines to build the Norris Dam in Tennessee. When older brother Bob was enrolling in first grade Shirley was insistent that she too was going to school. So, enrolled she was and the two curly red-headed kids were forever assumed to be twins. The family made their way back to Georgia and Shirley graduated from Dalton High School before heading to university at Milledgeville State College for Women at age 15. Graduating from college at 19 she took a teaching job in rural North Carolina and taught home economics in a classroom equipped with a wood burning stove. She returned to Dalton and taught at her alma mater. After a courtship primarily by correspondence, she traveled to Tulsa where she married the love of her life, Bill Dalton in June of 1953. Shirley taught at Central High School in Tulsa for four years. She and Bill then started their family, living in Charlotte, North Carolina for 8 years. Upon returning to Tulsa, Shirley began teaching again, securing a Foods position at East Central High School. She also began her Master’s work at the University of Tulsa. When she completed her master’s degree Shirley moved into a counselor position at East Central and remained there until her retirement from public education. Shirley and Bill were active members of Garnett Road Baptist Church. They enjoyed square dancing and traveling together. Shirley baked beautiful cookies, pies, and cakes. She always prepared nutritionally balanced meals, and sewed her family’s clothing. She passed these skills on to her children at an early age. She had a smile for everyone she met and the knack for getting to know you. Shirley is survived by her devoted husband, William (Bill) Hunter Dalton, Sr. of the home, her daughter Patti Klein and husband Richard of Tulsa, two sons, Hunter and wife Teresa of Woodinville, WA and Alan and wife Sharon of Houston, Texas, two grand-daughters, Tava Dalton of Katy, TX and Meghan Dalton of San Diego, CA, two great-grand-daughters, Meredith and Alexis Dalton of Katy, TX, younger sister Faye Martin of Byron, GA., and many nieces, nephews, and friends who admired and loved her greatly. She is preceded in death by her parents Earl and Grace Steele, older brother Bob Steele and younger sister Carol Rogers of Dalton, GA. To honor Shirley, in lieu of flowers, please make donations to the Alzheimer’s Association of Oklahoma or the charity of your choice. Visitation will be from 5 pm - 7 pm on Wednesday, March 11 at Floral Haven Funeral Home. Funeral Services will be at 10 am on Thursday, March 12 at Floral Haven Chapel.

The family of Shirley Dalton created this Life Tributes page to make it easy to share your memories.

Send flowers to the Dalton family.