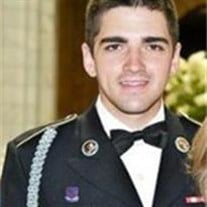 Specialist Christopher David Horton, 26, of Collinsville, Oklahoma was a sniper killed in action on September 9, 2011 while serving in Afghanistan with the Oklahoma Army National Guard’s 45th Infantry Brigade Combat Team.Â  He was killed when his unit was attacked with small arms fire in Zormat, Paktia Province.Â  Christopher was born on October 1, 1984 in Tulsa, Oklahoma to David and Cherie Horton.Â  He has two siblings, a brother, Nicholas, and a sister, Tenley.Â  He was married to his wife Jane Horton of Cleveland, Ohio whom he met while attending The Kingâ??s College in New York City. Before enlisting in the Oklahoma Army National Guard in 2008, Christopher graduated from the Missouri Military Academy in Mexico, Missouri. Chris was an exceptional cadet during his six years at Missouri Military Academy in every area. Academically, he was on the honor roll, earning the Academic Fourragere. He was the 2nd Platoon Leader his senior year, as well as captain of the rifle team. During his time with the Oklahoma National Guard, He was trained to be an infantryman, was SWAT certified, and was sniper qualified, graduating at the top of his class. Some of his extensive marksman awards include: The Gus Hadwiger Award in 2009, 1st place novice pistol in the Oklahoma National Guard Sergeant Majorâ??s match 2009, 1st place novice pistol in the Governorâ??s Twenty Matches in 2009, 2nd place novice rifle in the Oklahoma National Guard Sergeant Majorâ??s Match in 2009, 2nd place in the Old Fort Shootout in the Unclassified Production Division 2009, 2nd place pistol in The State of Oklahoma Governorâ??s Twenty 2009, Oklahoma State IDPA Championship High Military 2008 and 2009, 3rd place in the Carolina Cup Enhanced Service Pistol Sharpshooter in 2008 as well as many others. Â  Chris worked on many political campaigns including K.T. McFarlandâ??s 2006 Senate Campaign, Mayor Michael Bloombergâ??s 2005 re-election campaign, President Bushâ??s 2004 election campaign, and Governor Romneyâ??s 2008 Presidential primary. Chris also was a professional sponsored shooter through United States Shooting Academy in Owasso, Oklahoma, and was a business owner as well as a volunteer Police officer. Â Christopher was an accomplished competitive and recreational shooter. Every opportunity he had, Christopher fished both ocean and freshwaters. He loved fishing for all species of fish. Chris was both passionate and dedicated to politics and conservative causes. He also worked on many campaigns and was extremely patriotic and passionate about America and the freedoms we love and enjoy. Chris had a love for baseball and had aspirations of someday trying out for the minors.Â  A Funeral service will be held Friday, September 23 at One o’clock at the First United Methodist Church on Boulder Ave. in Tulsa, the Rev. Dr. Wade Paschal, Senior Pastor, officiating.Ã£â?¬â?¬ Christopher will be laid to rest at Arlington National Cemetery in Arlington, Virginia.Â  A memorial fund has been established in honor of Christopher’s life and service.Ã£â?¬â?¬ Donations to this fund are requested in lieu of flowers.Ã£â?¬â?¬Please donate to the Christopher D. Horton Memorial fund from Oklahoma at any Bank of America location in the country. It will be used to honor Chris and spread the longevity of his legacy. The account number is: 305003622012

The family of Spc Christopher David Horton created this Life Tributes page to make it easy to share your memories.