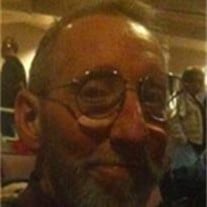 Stanley Â R. Burgess was born on July 7, 1949, in Glendale, CA, to Grace and Riley Burgess.Â He moved to Longmont, Colorado, where he grew up and graduated from Longmont High School in 1967. He played football for the Longmont Trojans where he was an All-Conference guard and was named as well on the Denver Post All Star Team.Â Many from those early years will remember Stan not only as a football player, but also as a member of the band The Sounds of Silence. On August 12, 1972, he married his high school sweetheart, Peggy Oliver. They had two wonderful daughters, Stacey and Leslie.Â He was always a very proud father and loved his girls very much. Stan accepted Jesus as his personal savior and was baptized in 1984 at First Christian Church of Longmont. Stan worked for many years as a drywall finisher for Yocum Plastering in Longmont. The family moved to Oklahoma in 1988 where he worked for 22 years as a route salesman at Potterâ??s Sausage.Â He was a long time member of Christview Christian Church in Tulsa where he served as a deacon, sang on the praise team, and occasionally sang solos.Â He loved music and played the guitar and piano.Â He was also a big sports fan and one of his favorite pastimes was watching the Denver Broncos, Oklahoma Sooners, and Tulsa Hurricane play football.Â He liked making people laugh and being together with his family.Â  In 2007, he became the proud grandfather of Jace Alexander Burgess, whom he loved more than gravy â?? and he loved gravy a lot.Â On January 13, 2011, Stan joined his grandson Jace and his dad Riley in heaven, where they patiently wait to be united with the rest of their loved ones. Stan is survived by his wife Peggy, his two daughters Stacey and Leslie all of Tulsa; his mother Grace Burgess and brother Milan of Longmont, CO, as well as numerous aunts, uncles, cousins, brothers- and sisters-in-law, nieces and nephews. His gentle strength will be missed by many.

Stanley Â R. Burgess was born on July 7, 1949, in Glendale, CA, to Grace and Riley Burgess.Â He moved to Longmont, Colorado, where he grew up and graduated from Longmont High School in 1967. He played football for the Longmont Trojans where... View Obituary & Service Information

The family of Stanley Raymond Burgess created this Life Tributes page to make it easy to share your memories.