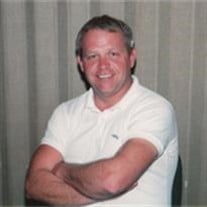 Stanley Dee Henderson, the eldest child of Marian and Edgar “Red” Henderson, was born in Tulsa, OK and, despite his daring nature, died peacefully in his sleep at home. Stan graduated from Nathan Hale High school in 1966 having received numerous awards for track, wrestling, golf, and baseball. After high school, he joined the Navy serving from December 1967 to October 1973. He was a Petty Officer 3rd Class Aviation Electronics Technician serving at NAS Lemore and aboard the aircraft carrier USS America. His US Navy awards included: National Defense Service Award, Vietnam Service Medal, and the Vietnam Campaign Medal. One of his greatest disappointments was not being able to attend the USS America Champagne Festival Reunion. He deeply treasured his Navy experiences and the friendship of his Shipmates. He married Sheree Leigh Powell at Sharp Chapel, University of Tulsa, on September 15, 1979. They had two daughters, Stacy Renae Henderson and Stephanie Michelle Henderson, ages 23 and 20 respectively, of the home. Both girls loved to go golfing with their dad and he later became very active in their interests of soccer, basketball, and the Bixby H.S. MCJROTC program in which they both participated. Stan worked many years in the automotive service industry then later as a Transportation Security Agency officer until he became disabled ultimately losing both legs to his severe diabetes. He was very proud of his TSA service and felt that it was his contribution to the safety of his country after 9/11. Anyone who knew Stan knew he loved sports! He had 2 holes-in-one during his life and even after losing one leg played golf again. And if he couldn’t play it, he surely wanted to watch it. For his many friends, Stan always had a big smile and a funny story. Stan never knew a stranger. Reverend Bob Green, Pastor of Arrow Heights Baptist Church in Broken Arrow, has known him most of Stan’s life and is officiating for his funeral service. Services are Monday, 3:00 PM on March 9, 2009 at Floral Haven Chapel in Broken Arrow, OK. Burial will be Tuesday, 2: 00 PM on March 10th at Ft. Gibson National Cemetery. Honorary pallbearers are: Doug Gray, Gary Surber, Pat Crowder, Rudy Sagehorn, Johnny Blaylock, and Mike Ward. Fair Winds and Following Seas, StanSurvived By: Stan is survived by his wife of almost 30 years, Sheree, and their daughters, Stacy and Stephanie. Also surviving is his mother, Marian Henderson; his brothers and their wives, Carl and Shari Henderson and David and Barbara Henderson; and, his sister Becky Sonderegger and husband Mike; and numerous other aunts, uncles, nieces, nephews, and cousins.

Stanley Dee Henderson, the eldest child of Marian and Edgar &#8220;Red&#8221; Henderson, was born in Tulsa, OK and, despite his daring nature, died peacefully in his sleep at home. Stan graduated from Nathan Hale High school in 1966 having received... View Obituary & Service Information

The family of Stanley Dee Henderson created this Life Tributes page to make it easy to share your memories.