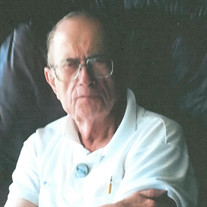 Stephen Dean Hart, 80 passed away at his home in Broken Arrow, Oklahoma on May 5, 2020. He was born on August 11,1939 in Denver, Colorado to Duard Raymond and Sarah Blanche (Coles) Hart. Stephen married Charolet Seabolt February 3, 1962. Stephen joined the U.S. Navy in 1957 and completed his service time in 1967. Steve attended Tulsa Junior College (TCC) and Northeastern State University attaining a Batchelor of Science degree in Accounting. After working various Steve ended his employment by retiring from the U.S. Post Office. Steve was preceded in death by his parents, 1 brother Bill Hart and wife Christine, 2 sisters Marjory Vaughan and husband Norman and Louise Meininger and husband Leroy and 1 Great-Granddaughter Amelie Doyle. Steve is survived by his wife, Charolet of the home, 2 daughters Donna Lambeth of Broken Arrow and Alexandra Hart and 2 sons Cody Hart and Zachary Hart of the home. Grand children, Elizabeth Doyle and Matthew of Tulsa, Matt Upky and Ashley of Alabama, Michael Lambeth, Noah Lambeth, Shea Lambeth , Tyler Lambeth, Sarah Lambeth and Alyssa Lambeth of Broken Arrow. Steve had 3 Great grandchildren, Shelby McManus, Talon Upky and Brooklyn Upky. Steve loved to travel and watch his grands and great grands grow up. Some of their favorite memories of him are him getting Matt up out of bed and carrying him to the living room and Matt helping them move a shed, Noah remembers most the genealogy trip they took, Alyssa remembers him attending Veteran’s Day assemblies at her school and him getting her chocolate chip pancakes, Tyler remembers going to West Liberty, Shea remembers sitting on the patio drinking coffee while watching the hummingbirds and Ally remembers going on trips to Mission, Texas, New York and Florida to visit Carole and Noel. At Steve’s request there will be no services.

Stephen Dean Hart, 80 passed away at his home in Broken Arrow, Oklahoma on May 5, 2020. He was born on August 11,1939 in Denver, Colorado to Duard Raymond and Sarah Blanche (Coles) Hart. Stephen married Charolet Seabolt February 3, 1962. Stephen... View Obituary & Service Information

The family of Stephen Dean Hart created this Life Tributes page to make it easy to share your memories.

Stephen Dean Hart, 80 passed away at his home in Broken Arrow,...

Send flowers to the Hart family.