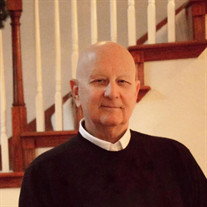 On Tuesday, August 25th, 2020, Stephen Carl Jones, loving husband and father of four children, passed away at age 69. Stephen was born on March 6th, 1951 in Lamesa, Texas to James Laverne and Dora Annette (Thomas) Jones. He received his Bachelor of Science degree from West Texas State University in Canyon, Texas in 1974, and was an oil and gas operator in Kansas. On June 22, 2000, he married Tracy Marie Gontarek. Stephen was preceded in death by his father, J.L., and his mother, Annette. He is survived by his wife Tracy, his four children, Stephanie, Caralee, Rachel, and Alexandra, his brother Lynn, his sister Mary, seven grandchildren, one great grandchild, several cousins, nieces, and nephews. A memorial service will be held in his honor on Friday, September 4th at 12:30 pm in the Floral Haven Chapel. Flowers may be sent to Floral Haven Funeral Home 6500 S. 129th E. Ave. Broken Arrow, Oklahoma 74012. For those unable to attend, please follow the link for webcasting services. View Funeral Webcast

The family of Steve Jones created this Life Tributes page to make it easy to share your memories.