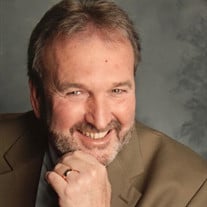 September 13, 1952-March 18,2021 Steven William Reppert, 68, of Broken Arrow, OK, formerly of Kutztown, PA, passed away on March 18, 2021 Steve loved his wife, Janet, he cherished his grandsons, and he treasured his brothers, nieces and nephews. He always had a smile for his friends, and he loved to laugh. Steve was an honorable and loyal friend to many. He was funny, charming, and had a passion for traveling with his wife and their two dogs, experiencing the journey of visiting National Parks, Zoos, faraway friends and family and seeing the country from an RV. He appreciated the many types of food during his travels. Steve was always on an adventure, and anyone who was lucky enough to be around him enjoyed the laughter, fun and joy of this amazing man. He lived his life to the fullest. He was born in Reading, PA on September 13, 1952, a son of William Reppert and Mary (Odenheimer) Reppert. Steve attended Kutztown high school and graduated in 1970. He went on to East Stroudsburg State College and earned a degree of Bachelor of Science in 1974. Steve worked at Dresser Rand, Hanover, and was the Manager of Application Engineering at Exterran in Broken Arrow for 35 years. He retired in May of 2015. Steve is survived by his wife, Janet Reppert, two stepsons, Daniel Parks of Broken Arrow, Ok and Michael (Jenny) Parks of Broken Arrow, two grandchildren (Lucas, Nathan) two brothers, Dale (Louann) Reppert of Kutztown, PA, and Todd (Laura) Reppert of Houston TX, and nieces and nephews of whom he adored. He was preceded in death by his mother, Mary, and his father, Bill. https://webcast.funeralvue.com/events/viewer/50698/hash:20A4711FD213EB67 No services planned at this time.

The family of Steve Reppert created this Life Tributes page to make it easy to share your memories.

Send flowers to the Reppert family.