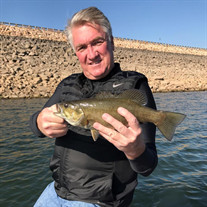 Steven L. Martin, 64, of Greeley passed away May 14, 2021. Steven Lee Martin, known to his family and friends as “Steve”, was born October 8, 1956 in Tulsa, Oklahoma to Kenney and Joyce (Haynes) Martin. He was raised and educated in Tulsa. He attended Tulsa East Central and was an accomplished athlete playing both baseball and basketball. He graduated in 1974. After graduating, he attended North Eastern State University in Tahlequah, Oklahoma for Construction Management. Steve worked for Ross Labs for a short time before beginning his construction career in Oklahoma. In 1996, he came to Greeley and started working at BMC West selling lumber. He owned and operated his own heating and air company for a time, eventually returned to what he did best, sales at King GMC. Here he worked in fleet and commercial sales. Steve was currently employed at Transwest Truck Trailers and RV’s. An outdoorsman through and through, he loved fishing, golf, and camping. Steve was a dear friend to many and will be remembered mostly as the exceptional father he was. Never missing any of his kids' activities or opportunity to spend time with them. He will be greatly missed by his children, Christopher Martin of Longmont and Jamie Martin of Greeley; sister, Debbie Martin Trinder of Tulsa, Oklahoma; uncle, Bill Haynes of Tulsa, Oklahoma; niece, Ashley Trinder of Tulsa, Oklahoma; and nephew, Austin Trinder of Austin Texas. Steve is also survived by many cousins. He was preceded in death by his parents. A Celebration of Life gathering will be held on Saturday, June 19 from 2pm - 4 pm at the Floral Haven Funeral Home Family Center

The family of Steven Martin created this Life Tributes page to make it easy to share your memories.

Send flowers to the Martin family.