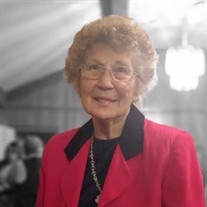 Thelma Faye Medlock Mann, 87 years, 9 months and 3 days passed from this life on Saturday, February 8th, 2020 in Broken Arrow, OK. She was born on May 5, 1932, to Callie Medlock & Neoma Duensing Medlock in Broken Arrow, (Wagoner County), OK. She married Marvin Kenneth Mann on July 24, 1950 with just 10 days short of celebrating their 63rd wedding anniversary; their example of true unselfish love is a model to be followed. Her life was service to her Lord and Savior Jesus Christ, to love on His family and serve with His church family. She enjoyed quilting, cooking and was known as a ferociously hard worker. She was a courageous warrior against diabetes which she valiantly fought for fifty-eight years. She is survived by three daughters: Carol Reeder of Tulsa, Connie Burton of Bedford, TX, Sheila Bennett and husband Mike of Broken Arrow and one son David Mann and wife Sandra of Goldsboro, NC. Eight grandchildren: Rev. Brian Burton and wife JJ of Bedford, TX, Noah Bennett of Mannford, Angie Burton Goyer and husband Kyle of Bedford, TX, Lindsey Bennett Borror and husband Jeremy of Broken Arrow, Amber Mann Winders and husband Robert of Goldsboro, NC, Allison Reeder Sheffield and husband J.J. of Tulsa, Rev. Daniel Mann and wife Melissa of Skokie/Chicago, IL and Jacci Reeder of Tulsa. Seventeen great grandchildren with two more on the way: Jade Dapaah, Savannah Cole, Riley Faye Goyer, Emerson Goyer, Mindi Cartwright, Kaylee Borror, Austin Warford, Abigail Borror, Piper Borror, Ayden Winders, Ryan Winders, Dylan Winders, J.R. Sheffield, Callie Rose Sheffield, Carlie Mann, Colby Mann, and Charlotte Mann. She is survived by one brother Ray Medlock of Broken Arrow, two sisters-in-law Linda Medlock of Bixby and Elaine Medlock of Nashville, TN, and a host of family and friends. She was preceded in death by her spouse, Marvin K. Mann, parents, Callie and Neoma Medlock and three brothers: Carl Medlock, Marvin Medlock and Troy Medlock. She was a charter member of Liberty Free Will Baptist Church. She loved those she attended with and had a special bond to another former Pastor’s wife, Velda Withers as they spoke daily. She was a proud graduate of Broken Arrow High School and continued to meet and have frequent gatherings with the “Class of 1950”. She was known by her unequaled work ethic. She raised four children, worked with and supported her spouse in multiple business endeavors as well as supported him as he planted and pastor numerous churches. Some of her fondest memories were the hours she spent serving others at the Arkansas Valley Campgrounds near Peggs, OK. Her passions were serving Jesus, serving her husband, loving her family and quilting. A sampling of her quilts will be displayed during her memorial service in the Liberty sanctuary. The family will receive guests Tuesday evening, February 11th at Floral Haven in Broken Arrow from 5:00pm to 7:00pm. A celebration of life will be held on Wednesday, February 12th at 10:00am at Liberty Free Will Baptist Church, 1100 N. 5th in Broken Arrow with Rev. Brian Burton, Dr. Curtis Linton, Rev. Joey Griffin and Rev. Daniel Mann officiating. A graveside service will be held that afternoon at 3:00pm in Checotah, OK, south on Old Hwy 69 for the family and friends in Checotah and Eufaula communities. In lieu of flowers, she has requested that memorial donations be directed to: Arkansas Valley Assoc. of Free Will Baptist P.O. Box 3 Oakhurst, OK 74050 Keystone Church 1711 Keller Parkway Keller TX 76248 Living Hope Free Will Baptist Church 8517 Kimball Avenue Skokie, IL 60076 The family would like to express and acknowledge some very special caregivers: Sheila Mann Bennett – upon our Dad’s passing Mom moved just doors down from Sheila and then, just a number of months ago, they chose to combine households. Sheila made Mom’s health a priority and made her as comfortable as possible. On the days Sheila was out of the home, Joyce Korn and her brother Marvin Babcock – Joyce was kind and compassionate addition to our extended family. Linna Bennett – Sheila’s Mother-in-law was a great comfort to our Mother.

The family of Thelma F. Mann created this Life Tributes page to make it easy to share your memories.

Send flowers to the Mann family.