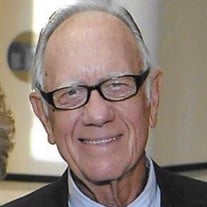 Thomas Rutherford Brett, Classen High School’s class of 1949’s “Prince of Friendship” went home to the Lord peacefully, at home, with is family present on February 6th. He was born in Oklahoma City in 1931. In the fourth grade, he met Mary Jean James, who would later become his wife of 69 years and mother of his four children. He is remembered by his many friends for his kindness, humility, self-discipline, wit, wisdom, and good humor. At Classen, he was starting guard on the 1948 state championship basketball team - beating Tulsa Central 32 to 31. He retired as a full Colonel from US Army JAG and served two years active service as an artillery officer at Fort Sill. While in the Army, he was an eyewitness to eight atomic bomb explosions. A proud Sooner, he attended Oklahoma University as an undergraduate and graduated from its School of Law. He served on the OU’s Board of Regents from 1971-1977, and as Board President from 1977-1978. While on the Board he was instrumental in creation of OU’s medical center in Oklahoma City, served on two presidential search committees, and chaired the committee that hired Barry Switzer as the head football coach. Tom was an avid (Mary says ‘rabid’) golfer who once held a six handicap. Tom began his legal career in Tulsa as an assistant district attorney, and afterwards continued in private practice as a trial lawyer. In 1979, President Carter appointed him to be a United States District Judge for the Northern District of Oklahoma, where he served until 2003. He was known for his commitment to ethics and to upholding the highest standards of the legal profession. Notably he presided over the trial of leading drug king pin Jose Abello and worked to systematically reduce cost and delay in the justice system through administrative improvements and alternative methods of dispute resolution. He said he was most honored by the recognition of his fellow attorneys, including being elected as Fellow of the American College of Trial Lawyers, receiving the American Inns of Court Professionalism Award (recognizing those ‘whose life and practice display sterling character and unquestioned integrity’), receiving both the Ethics and Judicial Excellence awards from the Oklahoma Bar Association, and both the Golden Rule and the Outstanding Senior Lawyer Awards from the Tulsa Bar. He was inducted into both the Oklahoma and Tulsa Halls of Fame. He was active in Kirk of the Hills church, where he (with Mary) co-taught the Sr. High Sunday school class at the Kirk of the Hills for some 15 years, and also served as an Elder. Notable among his many charitable activities were serving on the Board of Literacy and Evangelism International, as Trustee the JE and LE Mabee Foundation, and on the advisory board of the Salvation army. The good news (and it is the Gospel Truth) is that, by the grace of a Loving God, Classen High School’s “Prince of Friendship” has now met the Prince of Peace face to face. He is survived by his Wife, Mary, four children Laura Brett Tribble, Ford Brett (Kathy), Susan Brett Hughes (Bob), Maricarolyn Brett Swab (Brett), 11 grandchildren and 17 great grandchildren. In lieu of flowers please consider donations to: The Salvation Army, Box 3367 Tulsa, 74101 /// Kirk of the Hills, 4102 3 61st, Tulsa 74136 /// St Francis Hospice 6600 S Yale #350, Tulsa, 74136 /// University of Oklahoma Law School scholarships, 100 Temberdell Rd, Norman 73019. Regrettably, due to Covid, his service is limited to family only. Everyone is invited and welcome to stream the service 11:00 Friday the 12th at thekirk.online.church (be careful, notice the TWO “dots”).

The family of Thomas Brett created this Life Tributes page to make it easy to share your memories.

Send flowers to the Brett family.