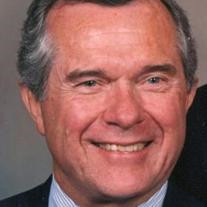 Thomas E. Fry, 75 years of age. Resided in Tulsa, OK and passed away on Wednesday, January 16, 2013, from complications of Alzheimerâ??s disease. Tom was born September 19, 1937 in Okmulgee, OK, to Roy A. and Sitha Fry. He was married to Jamie Bevins on June 26, 1992 in Tulsa, OK. Tom graduated from Choctaw High School in 1955 and attended college at the University of Oklahoma, where he was a proud member of the Pride of Oklahoma, and San Diego State University majoring in Engineering. He worked heavily in the advertising community in Tulsa, most recently owning AdStrategies, Inc. from 1991 to 2008 when he retired. He also owned Fry Associates, Inc., and served on the Executive Board of several other companies and non-profit organizations. Tom served in the community as a leader in both Scouting and education. He received the prestigious Silver Beaver Award in 1987 for his outstanding service to the Boy Scouts of America. Additionally he served on the Union Public Schools School Board, where as president, was largely responsible for ushering the district in its growth and outstanding facilities such as Unionâ??s Tuttle Stadium. Tom was an active member of First United Methodist Church where he was a member of the Builders Class and sang in the Sanctuary Choir. He was an avid fly fisherman, accomplished marksman, excellent skier and rabid OU fan. Preceded in death by his parents and brothers Roy A. Fry Jr., and Emmett B. Fry. He is survived by his wife Jamie; children Steve Fry of Dallas, TX, Sheri Butcher of Owasso, OK and Sean Fry of Tulsa, OK; Stepchildren David Ives of Franklin, TN and Michelle Kleptz of Englewood, OH, Grandchildren Ashley Prentice of OKC, Austin Bewley of Owasso, OK and Ella Fry of Meridian, ID; Nathan, Jon, Sam, Margaret, Jed and Rachel Ives of Franklin, TN and Charlie, Clarie and Carrie Kelptz of Englewood, OH. Services for Mr. Fry will be held Tuesday, January 22, 2013 at First United Methodist Church of Tulsa at 11 a.m. Fry will be interred at Floral Haven. For those that know Tom, he would say to you, G.A.I.W.A.

Thomas E. Fry, 75 years of age. Resided in Tulsa, OK and passed away on Wednesday, January 16, 2013, from complications of Alzheimerâ??s disease. Tom was born September 19, 1937 in Okmulgee, OK, to Roy A. and Sitha Fry. He was married to Jamie... View Obituary & Service Information

The family of Thomas Edward Fry created this Life Tributes page to make it easy to share your memories.