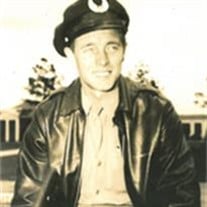 Thomas J. Hecklin, Jr. Thomas J. Hecklin, Jr. age 96, passed away peacefully on June 29, 2012. Born May 14, 1916 in Minneapolis MN, to Thomas J. and Estelle Hecklin. Tom interrupted his college career to become a flight instructor for the Army Air Corps during World War II. After the war he started his own crop dusting business in the Rio Grande Valley. From there, his career moved into corporate aviation, flying for such businessmen as Clint Murchison, at the time owner of the Dallas Cowboys, A. Ray Smith, owner of the Tulsa Oilers baseball club, Harold Stuart, General Manager of KVOO TV and Radio, Roger Wheeler, chairman and CEO of the Telex Corporation. Tom was honored to fly such dignitaries and celebrities as President Harry Truman, John Wayne, Ward Bond, Gene Autry, Warren Spahn. On March 7, 1973, Tom married the love of his life, Billie Jo Dodson, and the couple settled in Broken Arrow. Tom was an avid, lifelong golfer, having been taught the game by his father, who was a golf professional, and ran many clubs and courses throughout the country. Upon retirement, Tom involved himself in many hobbies and interests, including photography, remote controlled planes and boats, and his model train garden. Tom was preceded in death by his parents, and sister, Elizabeth Lamprey. He is survived by his wife, Billie Jo, step daughter Robi Francis and her husband James of Broken Arrow, niece Mary Bare and her husband Ben of New Hampshire, and grandson Taylor Francis, of Broken Arrow. Tom also leaves behind numerous nieces, nephews, grandnieces and grandnephews

The family of Thomas J Hecklin created this Life Tributes page to make it easy to share your memories.