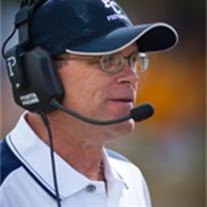 Thomas Land â??Jakeâ? Jacobsen Â  Land â??Jakeâ? Jacobsen, 59, passed away Tuesday, July 24 in Phoenix, Ariz. Diagnosed with rheumatic fever as a child, Land refused to let the disease define his life. When told his football and baseball playing days were over, he told the doctor, â??No, they are just beginning.â? He carried that same passion into his playing career, taking the Memorial Chargers to the Class 4A state championship game in 1970. After graduating from high school in 1971, Land started his college career at Fort Lewis College in Durango, Colo., before transferring to UCO in Edmond where he played in 1973-74. He used the same tenacity, character and leadership he displayed as a player in a coaching career that spanned 35 years, 15 as head coach at Western New Mexico, Scottsdale (Ariz.) Community College and most recently the last four years at Phoenix College. At Scottsdale, Jacobsen produced two First Team All-Americans, two Second Team All-Americans and two Academic First Team All-Americans. In 2008, he guided Phoenix College to its first winning record in 20 years and to its first bowl game in 22 years. In his final two years at Phoenix College, 37 players went on to Division I careers. During his three seasons as head coach at Scottsdale, Land led the Artichokes to more victories in the previous six years combined.Â  While at SCC, he coached quarterbacks Joe Germaine and Tim Rattay, each of whom played in the NFL. In addition to coaching, Land was passionate about the New York Yankees. He began his career at Union High School before moving to college with stops at BYU, Wisconsin, Utah, Montana State, New Mexico State and Idaho State. He is survived by his daughter, Annie of Sandy, Utah, mother Betty Jacobsen and sister Lynn Jacobsen of Tulsa, brother Pete and his wife Jodee Jacobsen of Broken Arrow, brother Karl and his wife Norma of Burleson, Texas and niece and nephews and great nieces and nephews. He is preceded in death by his father Walter; brother Wayne; and sister Jane. Service is scheduled for Thursday, 11 a.m. at Ascension Lutheran Church, 4803 S. Lewis in Tulsa. Â  Â Phoenix College Memorial Service: Thursday, August 16th at 2:00pm at Bulpitt Auditorium.

The family of Thomas Land Jacobsen created this Life Tributes page to make it easy to share your memories.