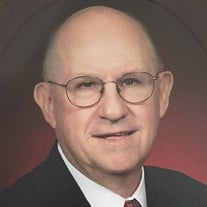 Thomas Elmer Prater 1935-2021 Tom Prater (86), a long-time resident of Tulsa, OK passed away peacefully surrounded by his loving family and friends on Friday, November 26, 2021. Tom was married to Patricia Ayer Prater since 2008, they shared caring and love. Tom was born in Denton County, Texas and grew up in Duncan, Oklahoma. Tom married Sara Helen Prater (nee Chapman) in 1954 and they shared and beautiful and lovingly devoted life together, raising three daughters until Sara’s passing in 2007. He received his degree in Business Administration (and a minor in music) from Central State University in Edmond, Oklahoma. Tom was a State Farm Insurance Agent/Manager for thirty-four years until his retirement in 2000. He was a long-time member of First Baptist Church in Tulsa where he was an ordained deacon and a member of the choir. In addition to his wife Pat, Tom is survived by his three daughters, Frances (Fran and Scott) Phillips of Mustang, Oklahoma and their children Darcy Jones of Tuttle, Oklahoma and Mason Phillips of Edmond, Oklahoma, Angela (Angie) Prater and her partner, Leigh Ann Chermack of Mission, Kansas, and Andrea (and Brian) Toland of Huntsville, Alabama and their children, Bryna Looney of Huntsville, Alabama and Peter Toland of Davenport, Iowa, and his sister Maxine Ridley of Duncan, Oklahoma. Tom is also survived by six great grandchildren, as well as numerous nieces and nephews. Tom was a wonderful and devoted father, grandfather, and friend who loved spending time with his family. He enjoyed traveling, playing golf, and singing in the church choir and was known for his tenor voice. A memorial service will be held on Tuesday, November 30, 2021 at 10:00 AM at Floral Haven Funeral Home, 6500 S. 129 E. Ave., Broken Arrow, OK. The family requests in lieu of flowers, please make a donation in Tom’s honor to: First Baptist Church of Tulsa at 420 S Detroit Ave. Tulsa, OK 74103.

The family of Thomas Elmer Prater created this Life Tributes page to make it easy to share your memories.

Send flowers to the Prater family.