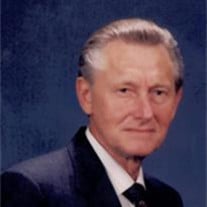 Tom H. Brown passed away peacefully on Saturday, May 24, 2008, with Priscilla by his side. He had suffered for approximately seven years from Lewy Body Disease, a combination of Parkinson’s and Alzheimer’s, after being properly diagnosed in 2005. He was born in Maysville, Arkansas March 20, 1929, the 7th of 9 children to Edwin & Geneva Brown. His family moved to Ochelata, Oklahoma, in 1941 and attended the Ochelata schools where he was considered a star basketball player. He moved to Tulsa at the age of 18 and was accepted in the four year Sheet Metal Apprentice Program in January 1948, becoming a highly skilled sheet metal craftsman. He married Priscilla Oxley on August 16, 1958, and enjoyed nearly 50 years of marriage. Many people enjoyed his nicknames for Priscilla like Spiffy, Prissy, and Mom. After working for other Sheet Metal Contractors for many years, Tom purchased Tulsa Sheet Metal in 1981. He was known for his integrity and impeccable workmanship. Over the years, he exhibited his ability to design and create unique sheet metal parts for various industries. In 1976 he became a charter member of Tulsa Hills Church of the Nazarene (formerly Calvary Church of the Nazarene) and served faithfully on its building and maintenance committee. He continued serving on its church board until 2003. For many years he was active on the district serving on the District Finance Committee and the Church Properties Board as well as serving 10 years on the District Advisory Board. He was also very supportive and a great help to Priscilla for the 13 years she served as the District NMI President. After his retirement in 1994, Tom and Priscilla enjoyed several mission trips including ones to Russia, Germany, Africa, Venezuela, Brazil, Guatemala and Mexico. He had a gift of sharing his love with young children as remembered by his grandchildren, children at church and by many youth from the countries they visited. He especially enjoyed spending time with family and friends in Branson, Missouri and Orange Beach, Alabama. The family would like to thank their many friends who stood by them during the last three years of Tom’s illness. In addition, they are grateful for the care given by St. Simeon’s Adult Day Care Center, nurses and home health workers at Montereau in Warren Woods, and Sojourners Hospice Care. He was preceded in death by his parents Edwin & Geneva Brown, brothers Dan and Leon Brown, sisters, Zelma Ross, Hazeldean Hansen, Margaret Marquess, Nellie Knight and granddaughter, Lisa Brown. He is survived by his wife, Priscilla; son Michael Brown and wife, Tricia; son, Randy and wife, Jan; daughter Kimberlee Winn and husband, David, all of Tulsa; daughter Diana Downing and husband, Jefferson, of Lincoln, Nebraska; sister-in-law, Ruth Brown, of Bixby and brother-in-law, Carl Knight, of Buel, Missouri. Also surviving are grandchildren Jaime Bongers & husband, Roy; Amanda Painter & husband, Billy; Tyler, Jordan, Rachel & Andrew Winn; Kelsey, Spencer, Hudson, Knox & Gracie Downing; Matthew Love & wife, Crystal; Rusty Havel; Jennie Brown, Josh Brown; and four great grandchildren, Lindsey & James Painter, Kyle Johnson, and Levi Love. Also surviving are his brother, Floyd & wife, Mary Ann; sister, Doris Dodson, all of Bartlesville; sister-in-law, Ruth Brown, Bixby; brother-in-law, Carl Knight, of Buell, Missouri; and a host of family and friends. He loved the Lord and enjoyed a rich life of family and serving in the church. He will be missed by all who knew him.

Tom H. Brown passed away peacefully on Saturday, May 24, 2008, with Priscilla by his side. He had suffered for approximately seven years from Lewy Body Disease, a combination of Parkinson&#8217;s and Alzheimer&#8217;s, after being properly diagnosed... View Obituary & Service Information

The family of Tom Brown created this Life Tributes page to make it easy to share your memories.