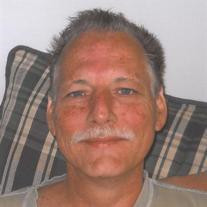 Tony was born on February 3, 1963 in Tulsa and left us on December 12, 2012.Tony grew up in Tulsa attending Hoover Elementary, Whitney Jr. High and Graduating from Nathan Hale High School in 1981. Tony loved and played sports all through his school years. Baseball, basketball and football during the early years, but his favorite sport was football. He played football at the position of tight end during his high school years and was very good at it, probably because he loved it so much. Tony was part of the Nathan Hale Rangers Football Team that took the State Championship in 1979 and wore the ring proudly. Tony attended Jr college after high school working on a degree in accounting, but into his third year went to work for RGIS Inventory Specialist Company and never looked back. Tony quickly moved up within his company to District Manager and worked at this company for 27 years until his retirement in 2011. He transferred with his company over the years to Midland, TX â?? Dallas, TX – Oklahoma City and even Layette, LA for a short time , but spent most of his years in Dallas. Even though he made Dallas, TX his home for many years, he never stopped being a HUGE Oklahoma Sooners fan. He did however become a big Texas Rangers fan. Tony loved to travel and play golf, but what he enjoyed the most was spending as much time as he could at his lake house at Possum Kingdom Lake in Texas. He loved to sit on his big front porch (with an OU flag hanging proudly) or sit in his OU chair in the water surrounded by friends just enjoying the moment. He would jump up when the mood hit and zip around the lake on his jet ski. As one of his friends stated â?? It made you smile to watch the childhood joy of a grown man on his jet ski. He even drove around the lake area in a red golf cart with an OU decal on it. Tony loved his family, especially his kids and his friends with all his heart. He never missed an opportunity to go to the woods with his high school buddies, head down to the local spot to kick back with friends, plan a get together with friends when he was home or enjoy the many family card games. Tony loved life and never took it for granted. He had such a wonderful sense of humor, loved to tease you just to see you laugh or make you smile, got such a kick out of surprising you in some wonderful way and was always ready to lend a helping hand. Tony fought his cancer with bravery and grace that inspired and humbled us all to the very end. Even when he was so sick, he would jump up and say he was okay, never wanting to miss that time spent with you or that event that was going on. He was the best father, son, brother and friend anyone could ever ask for.Tony was preceded in death by his mother â?? Brenda Terrell. We know that she was waiting for him with loving arms. She is now hugging and fussing over him, just as we know he is now teasing her and making her giggle. He was also preceded in death by his grandparents, aunts and uncles.Tony was survived by his three wonderful children â?? Nikole, Danielle and Michael who were the love of his life as well as his father â?? Elmer Terrell, sister â?? Tina Maxwell, brother-in-law â?? Doug Maxwell, nephew Zachary Maxwell, niece â?? Sarah Anderson and great-niece â?? Bently Grace. He is also survived by an aunt and many cousins.We will miss you so much and we love you more than you will ever know.Funeral service will be: Monday, December 17, 2012 â?? 3pm @ Floral Haven Chapel, BA There will be a fellowship time with food served after the service in the Floral Haven Family Center. We would love to have you join us for this. A second service will be held in Dallas, TX where Tony will be laid to rest. If you would like to do something instead of sending flowers â?? Tony would love it if you would make a donation to the Pancreatic Cancer Action Network. For more information go to pancan.org.

Tony was born on February 3, 1963 in Tulsa and left us on December 12, 2012.Tony grew up in Tulsa attending Hoover Elementary, Whitney Jr. High and Graduating from Nathan Hale High School in 1981. Tony loved and played sports all through his... View Obituary & Service Information

The family of Tony Lee Terrell created this Life Tributes page to make it easy to share your memories.