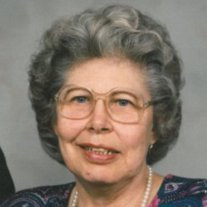 Vada Victoria Cox (also called “Vada Pie” by her husband), mother, grandmother, great grandmother, and the glue that held this crazy and wonderful family together. She was born October 12, 1924 in Washburn, Missouri (the 9th of 12 children) to Nelson and Quintella Paul. Vada entered Heaven’s Gates on September 28, 2013. Her young life was spent in and around the Washburn area where she attended Washburn High School. She played basketball, swam with her friends and siblings in Sugar Creek and was President of her Senior Class. When WWII broke out, she and 3 sisters moved to California where she worked in the shipyards to help with the war efforts. Vada met Duel (Dude) the love of her life while he was stationed in Berkley, California on a blind date with her sister and his brother. Grandpa says he kissed her only 2 blocks away from her house, something she vehemently denies. They married in 1945. Mike was born in 1947 and Eloise in 1950 while in California. They moved to Oklahoma in 1954 and their third child, Jim was born in 1957. Vada was “a mother to every kid on the block”. All the neighborhood kids knew they were welcome at the Cox home. They enjoyed 66 years of marriage together. She received Christ as her Savior in October of 1949, the night after her husband got saved. Vada was a devout Christian with a servant’s heart who loved the Lord and taught her family of this same love. She was a member of Lynn Lane Baptist Church where she taught the older Women’s Sunday School class (the JOY Class) until she was no longer able. She also taught children in her younger day and was always involved with Vacation Bible School and Christmas Programs. She also organized the ‘prayer chain’ for many years and was involved with the bus ministry. Vada loved crossword puzzles working the daily newspaper puzzle every day. She played many a game sitting in the floor with her grandkids, something she loved more than anything. Her favorite grown up games were of course Scrabble and Upwards (which she played with family and friends every Thanksgiving and Christmas). She was also an avid OU fan and enjoyed going to games in Norman and watching them on TV. She was always involved with her family and was ready to go or do anything when invited. She made the best homemade pecan pie and biscuits EVER. She was well known for her cornbread dressing that was loved by all. By her example she taught us to love Jesus and to love others. Christian music was a huge part of their lifes and albums of the Blackwood Brothers and many other Southern Gospel Quartets were played on the phonograph throughout their lifetime. She could also play the organ. She instilled in us a love for music and the Lord. Vada was preceeded in death by her husband, Duel. She is survived by her son Mike Cox and wife Jeanie, daughter Eloise Cox and son Jim Cox and wife Cathy – all of Tulsa. God blessed her with 4 grandchildren: Jan, Jeff, Chris, and Heather, and 8 loving great grandchildren: Michael, Kamrynn, Izzy, Jovee, Madison, Christopher, Riley, Macy and many friends and family. (A heartfelt “Thank You” to the caregivers and nurses at Leisure Village and River Cross Hospice.) Funeral Services are at 10:30, Wednesday, October 2, 2013 at Lynn Lane Baptist Church. Internment is at Floral Haven Cemetery. Visitation is Tuesday, October 1, noon – 8pm.

Vada Victoria Cox (also called &#8220;Vada Pie&#8221; by her husband), mother, grandmother, great grandmother, and the glue that held this crazy and wonderful family together. She was born October 12, 1924 in Washburn, Missouri (the 9th of... View Obituary & Service Information

The family of Vada Victoria Cox created this Life Tributes page to make it easy to share your memories.