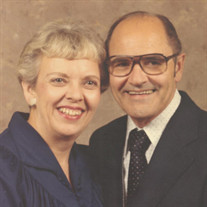 Vera Joan Florence Hiltenbrand 02-02-1928 to 08-05-20 To us, she was Mom. To others, she was Joan. Her friends called her Joanne. Mom loved her husband, Ken, and remembered his name long past other names. Mom loved to dance,... View Obituary & Service Information

The family of Vera Joan Hiltenbrand created this Life Tributes page to make it easy to share your memories.

Send flowers to the Hiltenbrand family.