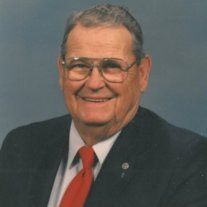 Whitey was born on January 6, 1920 in Avant, Oklahoma, where he lived until 1940. His parents were Josiah and Lula White. Whitey was the 7th of 8 children. He attended Avant Schools. Whitey went into the army in 1940 where he spent 1 year, then he enlisted in the United States Marine Corp in 1942. Whitey served 42 months stationed in the South Pacific where he was directly involved in 7 island invasions during World War II and many awards and honors. When returning from the war Whitey began his career in sales. He retired in 1982. Retirement was not a word consistent with Whiteyâ??s personality. He stayed busy by running a mail route on the weekends and reading water meters. He was a leader in their community and everyoneâ??s â??go to guyâ? that lived around him, but his two most favorite things were his time spent at church and his time spent running a guide fishing service on Lake Tenkiller. Whitey lived in Avant, OK; San Francisco, CA; Tulsa, OK (Where he snagged his wife Lucille); Catoosa, OK; Keys, OK and Bixby, OK. He was married to Opal Lucille Gage on Sept. 3, 1949 at his new brideâ??s parentâ??s home in Pryor, OK. Howard Gage, the brideâ??s brother officiated. Whitey was a member of Keyâ??s Baptist Church in Keyâ??s Oklahoma and Crossroads Fellowship in Bixby, Oklahoma. Whitey had many special friends. He loved everyone and everyone loved him. Whitey always became the â??Greeterâ? at any church he attended. No one could get past him without a hug, a gesture that has always withstood in his family, because of his example. Whitey was involved in many organizations and clubs. He was a 32nd degree Mason; he was a Deputy Sheriff and then the Director of the Wagoner County Civil Defense Department. He was also an Auxiliary Police officer for the Rogers County Civil Defense. He started one of the first Volunteer Fire Departments in Oklahoma where he was the Fire Chief for almost 30 years. Whitey was also an active member of the Sheriff and Peace Officers Association of Oklahoma for many years. He was involved in the â??Fellowship of Christian Anglersâ? Association where he spent time at the FOCUS tournaments sharing his boat, tackle and knowledge with other adults, teens and children. Whitey and his wife Lucille enjoyed spending time with families at church as Mr. and Mrs. Santa Claus. Whiteyâ??s contagious smile and the twinkle in his eye made him the perfect Santa. Whitey loved to fish and spend time outdoors. He spent countless hours on the water. He loved to have family and group get-togethers and provide fish for everyone. He brought to life the old adage, â??Teach a man to fish and you feed him for a lifetimeâ? in more ways than one. Whitey brought so much happiness and joy to so many people. Whether it is a â??Good Morningâ? greeting at their home in Bixby, a genuine loving hug before a church service or simply a great big grin, pointed finger and a wink, everyone felt his love.

Whitey was born on January 6, 1920 in Avant, Oklahoma, where he lived until 1940. His parents were Josiah and Lula White. Whitey was the 7th of 8 children. He attended Avant Schools. Whitey went into the army in 1940 where he spent 1 year, then... View Obituary & Service Information

The family of Verl “Whitey” White created this Life Tributes page to make it easy to share your memories.