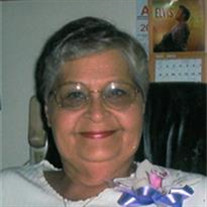 Veronica Mae (Ronnie) Bretanus was born in Walla Walla Washington on July 23, 1941 the child of Charles Lewis (Westy) Westenhiser and Marjorie Wilson Westenhiser. She lived in Washington state as a young woman and spoke of the crispy apples and fresh cherries from the surrounding orchards. Her parents moved to Duncan Oklahoma where Ronnie grew up and graduated from Duncan High School in 1959. She met a soldier stationed at nearby Ft. Sill in Lawton. That soldier was Raymond J. Bretanus, her husband of 44 years.Â  Ronnie and Ray raised five children, Charles (Chuck) Bretanus, Kathleen Bretanus Beck, Anthony Bretanus, John Bretanus and Robert J Bretanus. Â  Ronnie moved to Chicago with Ray and lived for several years before returning home to Oklahoma where she lived since. She was a bookkeeper by trade and worked for several companies and ending up working for American Airlines for over 25 years and retired from there in 2005. Â  Ronnie lived life to the fullest and enjoyed cooking, gardening, her friends and family, especially her grand grandchildren as she referred to them. She also had a great love of animals, dogs most of all. She always had a dog, Cesar, Lady, Princess, Mohawk (MOMO) and Teka. They were very pampered and a big part of her relaxation when away from work. She loved to fish, camp, and be outdoors if just walking under the trees watching nature in action. She would spend a lot of time on the patio watching the livestock as they grazed and the baby calves as they ran and played. She was truly an outdoorsman. Â  She was also very dedicated and loved her job at American Airlines and all of her friends and associates there. She talked many times about the checks for millions of dollars she wrote to the major oil companies for jet fuel. It amazed her at how much fuel costs were for a fleet of jets. She was very focused on her job and once discovered that the Canadian Government was charging American a fuel surcharge and had been for some time. This was not to be done. She single handedly took on the Canadians and American received millions of dollars in refunds. American was so proud of her noticing this error that she was honored with over 10,000 dollars in prizes and gifts. She was so proud of that day that she mentioned it regularly. Â  She was very proud of her grandchildren and their personalties and accomplishments. She beamed with pride when Daniel and Danielle graduated from college. She was proud of Christine for her responsibility and fending for herself when moving on her own. When Lindsay went to Australia to live and work last year she was worried and yet proud to see Lindsay see the world but was glad and happy to see her come home safe and sound. She was very proud that Tyler graduated and will be entering college this fall. She was also very lonely that she did not have the opportunity to be with and talk to Paige. Her heart was very heavy over this and she carried it to her grave. She was very proud of Kennedy and how mature she was at such a young age. She has cared for and loved her father through some pretty tough times and is a beautiful, smart and loving teenager that Ronnie had high hopes for in the future.

Veronica Mae (Ronnie) Bretanus was born in Walla Walla Washington on July 23, 1941 the child of Charles Lewis (Westy) Westenhiser and Marjorie Wilson Westenhiser. She lived in Washington state as a young woman and spoke of the crispy apples... View Obituary & Service Information

The family of Veronica “Ronnie” Mae Bretanus created this Life Tributes page to make it easy to share your memories.