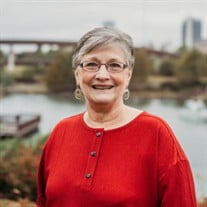 Vicki Sue Krawczyk, 68, of Tulsa, passed on to her forever home, Monday, January 31, 2022, in her home surrounded by family. She was born on May 6, 1953, to Gene & Hooley Ferguson. Vicki grew up in Clinton, Oklahoma where she went to school and graduated in 1971. She then went on to SWOSU in Weatherford, Oklahoma, graduating with her bachelor’s degree in accounting. As a child she joined Girl Scouts. At the time, Clinton Public Schools did not offer sports to the girls, so Vicki joined the band. She played the clarinet, and then eventually became the drum major for two years. She was so proud of her grandson, Tanner, when he became the drum major for Edison High School this year, following in her footsteps. In high school she was in band, FHA, Choir, Speech Club, Spanish Club, Pep Club, Student Council, Rocket Club, Drum Major 2 years, Junior Business Manager, Speech Club Secretary, Pep Club Treasurer, Tornado Girl of March her Senior year, and accomplished the Masonic Award as well. Vicki had a few different jobs after college before she finally ended up at PSO/AEP/Direct Energy. She was employed there in 1979 and retired in 2018. Anyone that knew Vicki, was very aware how much of an Oklahoma City Thunder fan she was. She had two co-workers, John & Rick, that she regularly group text about the Thunder games, along with any other sports info she wanted to discuss. She loved watching football and basketball, it didn’t matter if it was college or professional ball. Vicki was an avid reader; Mike Patterson & Richard Paul Evans were two of her favorite authors. Vicki loved Jesus Christ, she was very strong in her faith. She was highly involved with church as a high school kiddo, along as an adult. She was part of a group, Up with People, a faith-based choir that traveled around locally singing during her high school years. Vicki, LOVED, Michael Jackson, as we all know, SHE’s BAD!!! Who in the audience has ever been told, “BITE ME!” That was one of her most famous sayings, and she didn’t bat an eye telling anyone that!!! That infectious laugh she had, I know EVERYONE here has heard that, along with her most beautiful smile. Some would say that her laugh could be heard clear across the floor at work. Most importantly, Vicki loved her family. Her daughters and grandson were her world!! She loved people, a lot, even on her death bed she was worried about other folks’ wellbeing to the very end. She is very well loved by so many and will greatly be missed. Vicki was preceded in death by her Father and Mother, Gene & Hooley Ferguson. Her grandparents, and several aunts, uncles, and cousins. Vicki is survived by her daughters, April Bozarth and husband Melvin, Kara Pope. Grandson, Tanner Newman. Brother, David Ferguson and wife Janis. Niece, Christy Ferguson. Along with Ladd Fritz and wife Emily, Marjorie Guy and husband Zachary, and Martha Owen and husband Will. In lieu of flowers, donations can be made in the name of Vicki Krawczyk to the March of Dimes. A Celebration of Life service will be held 10:00 AM, Friday, February 04, 2022 at the Floral Haven Funeral Home Chapel in Broken Arrow, Oklahoma. For the family and friends that are unable to make Vicki's service in person may watch the service via the following link: https://webcast.funeralvue.com/events/viewer/68524/hash:D203DDBB5609C1F9

Vicki Sue Krawczyk, 68, of Tulsa, passed on to her forever home, Monday, January 31, 2022, in her home surrounded by family. She was born on May 6, 1953, to Gene & Hooley Ferguson. Vicki grew up in Clinton, Oklahoma where she went to school... View Obituary & Service Information

The family of Vicki Sue Krawczyk created this Life Tributes page to make it easy to share your memories.

Vicki Sue Krawczyk, 68, of Tulsa, passed on to her forever home,...

Send flowers to the Krawczyk family.