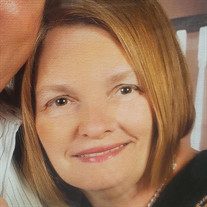 Vickie Lynn Renk, 61, of Broken Arrow, passed away on November 7, 2021. She was born April 24, 1960 in Oklahoma City to Thomas and Phyllis Vidol. A graduate of the 1978 class Choctaw High School, she went on to obtain her Associate’s Degree in business administration. In the early 80’s, she began her career with State Farm insurance. Little did she know that a fire in 1982 would send the love of her life walking through the office door to file a claim. On September 29, 1984, she married Karl Renk and they began their life together. Vickie and Karl welcomed their daughter, Amanda Renk, in 1989. Eventually, in 1997, they moved from Oklahoma City to Tulsa. Years later, they purchased their home in Broken Arrow, where she lived until the time of her death. One of her favorite things in the world was to sing, whether at church, karaoke, or at home humming along with jingles from commercials. Until her last days, she was always looking for the next concert to attend with her best friend, Debbie White. Many other things she enjoyed include playing cards and board games with family and friends, exciting nights spent at the casino, and watching her favorite shows. Oklahoma City Thunder was her favorite team and she never missed a game. Recently she and Karl were able to travel to Mexico, Jamaica, and go on several cruises, which were some of the highlights of her life. Even though she has passed on, we will never forget her vibrant and youthful spirit, her mischievous streak, and her heart that loved us all so deeply. Vickie was preceded in death by her parents, Tom and Phyllis Vidol. She is survived by her husband of 37 years, Karl Renk; her daughter and daughter-in-law, Amanda Renk and Allison Benesh; and her younger brother, Thomas “Tommy” Vidol Jr. Memorial Services will be held at 12:30 pm on Monday, November 22 at the Floral Haven Chapel. For those unable to attend, follow the link for webcasting services: https://webcast.funeralvue.com/events/viewer/64152

Vickie Lynn Renk, 61, of Broken Arrow, passed away on November 7, 2021. She was born April 24, 1960 in Oklahoma City to Thomas and Phyllis Vidol. A graduate of the 1978 class Choctaw High School, she went on to obtain her Associate&#8217;s Degree... View Obituary & Service Information

The family of Vickie Renk created this Life Tributes page to make it easy to share your memories.

Vickie Lynn Renk, 61, of Broken Arrow, passed away on November...

Send flowers to the Renk family.