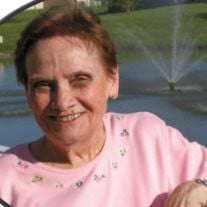 On March 2, 2013, Violet Ruth Hamel-Taylor was gathered into the arms of Jesus. She was born April 7, 1927 in Montrose, Colorado, the fourth child of Jesse Feary and Geneva Harris Feary. Preceding her in death was her father and mother; husband John Hamel and later David Taylor, as well as brothers Charles Feary, James Feary, and sister Martha Beddingfield. She is survived by her son Richard Hamel of Tulsa, Oklahoma, and daughter Martha Jane Barter and husband Bill Barter of Loveland, Colorado, granddaughters Bethany Harper of Broken Arrow, Oklahoma and Kristie Koldeway of Loveland, Colorado, grandsons Keith Hamel of Yukon, Oklahoma, Stephen Hamel of Tulsa, Oklahoma, and Tom Barter of Woodland Park, Colorado, eight great-grandchildren, and two great-great grandchildren. She grew up and attended school in Montrose, Colorado and later met and married John Hamel of Telluride. After marrying, they lived in Tacoma, Co. before moving to Tulsa. In 1976 she was widowed. She met and married David Taylor in 1984. Violet worked at Spartan School of Aeronautics, Hale-Hassall Food Distributors, and Vinson Supply Company from which she retired in 1988. She was a member of Mingo Baptist Church and Plainview Baptist Church. Although she was tiny in stature, she was a force to be reckoned with, especially in regard to family and faith. Throughout her life Violet was generous in spirit; giving not only monetarily, but of her time, energy, support, encouragement, and prayers for family and friends. She was steadfast in her faith and committed to her family. As the matriarch she was a care taker for all and the first to be there in a crisis. She was an outstanding example of what it truly means to be the hands of Christ. Violet will be greatly missed yet always remain in the hearts and memories of her loved ones.

On March 2, 2013, Violet Ruth Hamel-Taylor was gathered into the arms of Jesus. She was born April 7, 1927 in Montrose, Colorado, the fourth child of Jesse Feary and Geneva Harris Feary. Preceding her in death was her father and mother; husband... View Obituary & Service Information

The family of Violet Ruth Hamel Taylor created this Life Tributes page to make it easy to share your memories.