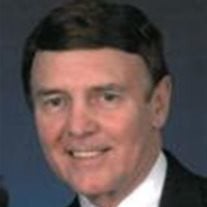 Virgil Arthur Carlson went home to be with his Lord Monday, January 20, 2014 from his residence in Broken Arrow, Oklahoma. He was 74 years old. He was born on January 29th, 1939 in Racine, Wisconsin to Virgil and Odile Carlson. He graduated from St. Catherine’s high school and later from Marquette University with a degree in Business. He served with the U.S. Navy in the Mediterranean right after marrying the love of his life. Carol and Virgil enjoyed 55 years of marriage. Along with Carol, Virgil is survived by daughter Carrie Witham, son Tom Carlson, and daughter and son-in-law Kelly and Greg Jeffries, all of Tulsa, Oklahoma. He is also survived by seven grandchildren and one great-grandchild as follows: Michael Witham of Tulsa, Kailyn, Kristen, Jason, and Jackson Jeffries of Tulsa, Tommy and Samantha Carlson of New Jersey and great-grandson Gabriel Jeffries of Tulsa. Virgil was a natural athlete who made the Milwaukee Braves professional baseball team after high school. He was also married and drafted into the Navy all in the same week. Therefore his time with the Braves ended before it began. His love for sports continued throughout his lifetime, spending many hours on the field as coach for his son as well as the #1 fan for his grandchildren and great-grandson. Above all, Virgil loved his wife and family. He loved being with family and enjoying all aspects of life. He loved being outdoors fishing, camping and doing yard work. Second to none was his passion and love for the Lord. Virgil and Carol traveled to conferences, seminars and always to church to learn all they could about their God. He always desired to sit in a chair at every service right behind his Pastor. Dad will be missed beyond words but lived a life that was filled to the brim with God, family and love. A memorial service will be held 1:00 p.m. on Saturday, January 25th, 2014 at Destiny Church located at 1700 S Aspen Ave Broken Arrow, OK, 74012.

Virgil Arthur Carlson went home to be with his Lord Monday, January 20, 2014 from his residence in Broken Arrow, Oklahoma. He was 74 years old. He was born on January 29th, 1939 in Racine, Wisconsin to Virgil and Odile Carlson. He graduated... View Obituary & Service Information

The family of Virgil A. Carlson created this Life Tributes page to make it easy to share your memories.

Virgil Arthur Carlson went home to be with his Lord Monday, January...