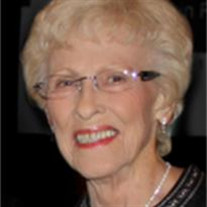 TULSA â??Â Sue Tibbs, 77, of Tulsa will be remembered as a loving wife, mother, grandmother and stateswoman. The six-term state representative from east Tulsa died on Good Friday, April 6, 2012, surrounded by her loving family. Â  Sue waged a long battle with ovarian cancer and survived four years after first diagnosis. Just three weeks ago she was on the Oklahoma House floor, doing what she was called to do for 12 years, â??the peopleâ??s work.â? Â  Services will be at 2 p.m. Wednesday, April 11, 2012, at Grace Church, 9610 South Garnett, Broken Arrow. Burial will follow at Floral Haven Cemetery, 6500 S. 129th East Ave., Broken Arrow. A memorial service will be held at 1 p.m. Thursday, April 12, 2012, in the House Chambers at the Oklahoma Capitol. Floral Haven Funeral Home of Broken Arrow is in charge of arrangements. Â  Sue was born Oct. 6, 1934, in Tulsa to Clyde and Frances Sloan. She grew up in Turley, just outside of Tulsa, with two older sisters. She graduated from Tulsa Central High School in 1953 and married the love of her life shortly after high school. Â  Virginia â??Sueâ? Sloan and Milton â??Homerâ? Tibbs were married Aug. 14, 1954, in Tulsa. Homer said he fell in love with an outgoing, down-to-earth girl all those years ago. And thatâ??s who she remained for 57 years. Homer and Sue were a great team, giving their all to everything from bowling to yard work to raising a family to campaigning. Â  Daughter Debbie Wiest was born in 1956 and daughter Kelli Dodd was born in 1961. Sue was a stay-at-home mom when the girls were growing up, serving on the Parent-Teacher Association, helping with Brownies, really any and all activities her girls were involved in. She fulfilled some of those same roles for her four grandchildren, Nikki Moody, Aubrey Moody, Austin Moody and Missouri Dodd. Â  When Sue was in her 20s she sang for the Oral Roberts University Choir. She also sang in the choir for a time at her home church, Grace Church in Broken Arrow. Sue was a woman of faith, secure in the knowledge she would spend eternity in a better place. She organized Tuesday noon devotions at the state Capitol and participated in a gospel singing periodically with legislators from both sides of the aisle. Â  After her children were grown, Sue went to work as an insurance underwriter. She also served as president of the Womenâ??s Insurance Association in Oklahoma. Sue had a keen interest in politics, inherited from her father. She volunteered on the campaigns of many Tulsans, including former U.S. Sen. Don Nickles, former Tulsa Mayor Dick Crawford, and former Gov. Frank Keating. It was Keating who asked Sue to consider a race for the state House in District 23.Â  Â  Sue sought prayerful guidance and decided to make a run for state House in 1986. She lost that race and another in 1998. But Sue never gave up. She won the seat in 2000, and every time after that. She was serving what would have been her final two-year term because of Oklahoma term limits. Â  Serving in public office was not a lifelong dream of Sueâ??s. She just had a heart for her neighbors, and believed serving in the Legislature put her in a better position to help them. She was a thinker who had a heart for what was best for the people. Â  Sue made herself available to her constituents 24 hours a day. She gave her home phone number to her neighbors and took their calls no matter the time of day. Many of her dinners went from hot to cold while she took a phone call from someone with a problem. Sue remained humble to the end, asking her family to let her know if she ever acted as though she was above the people she served. Â  The oldest member of the Oklahoma Legislature, Sue chaired the House Public Safety Committee and served on the Appropriations & Budget Human Services subcommittee, as well as General Government and Judiciary. Sue worked tenaciously for criminal justice reform, believing in justice reinvestment, like Tulsaâ??s Women in Recovery program. Sue began working her first session on voter ID issues, and just this March Oklahomans were required to show identification before voting because of Sueâ??s legislation. Oklahoma Eagle Forum named Sue Legislator of the Year for her work on voter identification issues. Â  When Sue was not at work, she enjoyed her flower and vegetable gardens. She loved to travel with family, visiting one of her favorite places, Wyomingâ??s Yellowstone National Park, six or seven times. She was an outdoorswoman, and didnâ??t understand anyone who wasnâ??t. She would rather clean than cook, even though she made some delicious dishes. Homer said her greatest talent, however, was talking. And thatâ??s why the voters loved her. She knocked on doors, discussed the issues and prayed with her constituents about their concerns. Â  Sue is survived by her husband of 57 years, Homer, of the home; her daughter, Debbie Wiest, of the home; her daughter, Kelli Dodd, of Tulsa; her granddaughter, Nikki Moody and her husband, John Hinkle, and their children, Karson, 11, Kelley, 7, and Arianne, 2; her granddaughter, Aubrey Moody, and her son, Evan, 4; grandson, Austin Moody; granddaughter, Missouri Dodd; sisters, Pat Boswell of Rockton, Ill., and Charlotte Tuton of Tulsa; sisters-in-law, Rosemary Allen and Janie Taylor; brothers-in-law, Eddie Tibbs and Al Tibbs; and numerous nieces, nephews, friends and colleagues. Â  Sue was preceded in death by her parents and sons-in-law, Calvin Wiest in 2008 and Billy Jack Dodd in 2003. Â  In lieu of flowers, the Tibbs family asks that donations be made in Sueâ??s name to: Free in Christ Ministries, P.O. Box 252, Coweta, OK 74429; or Family & Childrenâ??s Services, Attention: Women in Recovery S. Peoria Ave., Tulsa, OK 74120.

The family of Virginia Sue Tibbs created this Life Tributes page to make it easy to share your memories.