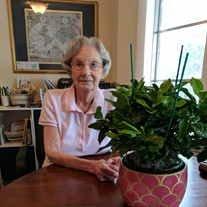 Vivien J. Dillman, 96, died at her home on May 31st, 2021. She was born June 22nd, 1924 in Bixby, OK, the only daughter of Dr. Ivel C. Worsham, DVM and Mary (Morris) Worsham. Vivien graduated from Bixby, OK High School and attended business college before her first job at Swift and Co in Tulsa, OK as a secretary. Next she worked at Spartan Aeronautical Engineering, also in Tulsa. During this time, she met and married Raymond M. Dillman. They were married on January 17th, 1944 while Ray was completing his service in the Army. They were married for sixty-sixty years. They lived together in Indianapolis, IN, Cheyenne, WY, Bixby,OK, Tulsa, OK, Corpus Christi, TX and Round Rock, TX. After the birth of their first child, she remained at home to raise her family of two boys and one girl. She was always involved in numerous activities while being a full-time homemaker and a member of the Tulsa Garden Club and an avid gardener. She was an award winning water-color artist leaving a legacy of beautiful pictures to her family and others. She served as a children’s Bible class teacher throughout her life as well as being the volunteer children’s education minister for many years at the 15th and Delaware Church of Christ in Tulsa. In her final years, she attended the Connect Church in Tulsa where she was known to everyone as “Grandma”. In addition to her parents, she was predeceased by her husband Ray in 2010. Surviving family include her three children, Kenneth and his wife Joy, Robert and his wife Gay and Carol (Stringfellow) and her husband Lynn. She had eight grandchildren, Rebecca Elam (Hutto, TX), Mary (Austin, TX), Dave (Austin, TX), Carrie and her husband McKenzie Cutshall (Edmond, OK), Craig and his wife Betsy (Franklin, TN), Doug (Austin, Tx), Steven Stringfellow and his wife Chrissy (Tulsa, OK) and Matthew Stringfellow and his wife Stevie (St. Petersburg, FL). In addition she had eight great-grandchildren, Sara Elam, Jack Elam, Hope, Joel, Addie Cutshall, Zachary Cutshall, Austin Muder and Kristin Muder. A memorial service will be held at 3pm June 5th at the Connect Church at 4930 S Sheridan Rd, Tulsa, OK 74145. A family ceremony will be held at a separate time at the Floral Haven Cemetery in Tulsa. In lieu of flowers, memorial donations may be made to Campus Ministries United (CMU), 3019 S 90th E Ave, Tulsa, OK 74129.

The family of Vivien Dillman created this Life Tributes page to make it easy to share your memories.

Send flowers to the Dillman family.