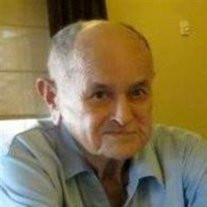 William Pierce Chrisman, Jr., the son of William Pierce, Sr., and Maude Douphlas (Inscore) Chrisman, was born on October 30, 1926 in Marlow, Oklahoma and departed his life on March 3, 2013 in Tulsa Oklahoma at the age of 86 years. Bill served in the U.S. Army in World War II from February 25, 1945 through February 13, 1947 and was a Sergeant (Technician Fourth Grade) 101st Airborne Division, Pacific theatre. After his service to our country, he pursued his college education first at Oklahoma State University and later earned his degree in Petroleum Engineering at THE University of Oklahoma graduating in June 1952. For the next 17 years, Bill worked in the oil fields of east Texas, Louisiana, and Venezuela. In 1969, he moved his family to Tahlequah OK where he and his brother Joe Perry Chrisman started Northeastern Finance Company. After they sold this company, Bill moved to Tulsa to work for an oil company until he retired. Bill met the love of his life while at OSU, and married Luella Payne on January 15, 1949 in Midwest City OK. To this union two children were born; Bradley and Lori. Bill was preceded in death by his parents, sister: Gracie Allene Parsley; and brother: Joe Perry Chrisman. He is survived by a loving family, his wife Luella of Tulsa, OK; son: Bradley Chrisman and his wife Brenda of Edmond, OK; daughter: Lori Hall and her husband Bruce of Tulsa, OK; and two grandchildren, Andrea Chrisman of San Francisco, CA and Kevin Chrisman of Oklahoma City, OK. Visitation will be from 3 â?? 8:00 p.m. with the family greeting friends from 6:30 to 7:30 p.m. Wednesday, March 6, 2013 and 10:30 a.m. â?? 12:00 p.m. Thursday, March 7, 2013 at Floral Haven. A Celebration of Life and interment will be at 12:30 p.m. with grave site salute following Thursday at Floral Haven, 6500 S. 129th East Avenue, Broken Arrow OK.

William Pierce Chrisman, Jr., the son of William Pierce, Sr., and Maude Douphlas (Inscore) Chrisman, was born on October 30, 1926 in Marlow, Oklahoma and departed his life on March 3, 2013 in Tulsa Oklahoma at the age of 86 years. Bill served... View Obituary & Service Information

The family of W. “Bill” Pierce Chrisman Jr. created this Life Tributes page to make it easy to share your memories.