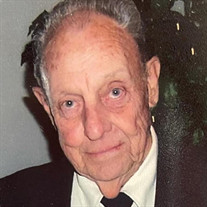 Wallace Berry Henry of Tulsa, Oklahoma passed away on Thursday, September 9th, 2021, at the age of 93. After several months of declining health, Wallace died peacefully with his beloved wife of 71 years and family by his side. Wallace was born in Drumright, Oklahoma on November 9, 1927 to father William L. Henry and mother Martha Ellen McMurtry Henry. His sister Peggy Ann Henry was born 3 years later. He graduated from Haileyville High School and shortly thereafter enlisted in the Navy in March of 1945. He served in the Navy for 18 month during World War II on the ship USS Donner. He continued his service in the Reserves for another ten years on the USS Waldron. At the end of the war, Wallace returned home and worked at the Ammunition Depot in McAlester, OK for a few years. In 1949, he met the love of his life at an outdoor roller skating rink in McAlister, OK. Wallace B. Henry and Lillie Mae Tyler were married on June 3, 1950 at the McAlister Church of Christ. They began their family shortly after having 3 children Jerry B. Henry, Connie L. Henry and Ralph Henry. He then began driving a bus for Greyhound Bus lines on April 28, 1953 and did so for 33 years. Wallace and his family moved to Tulsa in 1956. After retiring from Greyhound, Wallace enjoyed restoring classic cars such as a 51 Ford Victoria 2 door hardtop, a 1951 Ford Convertible and his pride and joy a 1966 Ford Mustang Coup and many others. He also got his pilot’s license after restoring two airplanes, a 1941 J3 Piper Cub and a 1947 Luscombe Silvaire. He was extremely talented with his hands and enjoyed the process of taking scraps and junk and making something beautiful. He won many awards from various car shows and clubs such as the early V8 club in which he was a member for more than 30 years. Wallace was very proud of his Choctaw heritage. His great, great grandmother relocated to Oklahoma traveling with her tribe on the Trail of Tears. He was an active member of the Choctaw Nation and even learned how to speak some of the language. He looked forward to his monthly edition of the Biskinik Choctaw newspaper. He was a faithful Christian and a long-time member of the Church of Christ. Wallace was preceded in death by his parents, Bill and Ellen Henry, his favorite son in law Mike Alred, his brother in law Eddie Mariano, his nephew Don Mariano. He is survived by his wife Lillie Mae Henry of Tulsa, his children Jerry B. Henry and wife Arlene of Verdigris, Connie Alred of Broken Arrow, and Ralph and Vickie Henry of Broken Arrow, his grandchildren Laura Kuester, Chance Alred, Racheal Burdette, Molly Henry, Kristy Henry and Angie McAlester, his sister Peggy Mariano of Shawnee and numerous great grandchildren and great, great grandchildren, nieces and nephews. A visitation for Wallace is planned for Monday, September 13, 2021 from 4:00-6:00 pm at Floral Haven Cemetery. A graveside service will be Tuesday, September 14, 2021 at 11:00 am with a reception after at the Floral Haven Family Center from 12:00- 2:00 pm. All are invited to attend and Floral Haven is requiring masks to be worn. How lucky are we to have something that makes saying goodbye so hard. “Chi pisa la chike”. Till we meet again.

Wallace Berry Henry of Tulsa, Oklahoma passed away on Thursday, September 9th, 2021, at the age of 93. After several months of declining health, Wallace died peacefully with his beloved wife of 71 years and family by his side. Wallace was born... View Obituary & Service Information

The family of Wallace Berry Henry created this Life Tributes page to make it easy to share your memories.

Wallace Berry Henry of Tulsa, Oklahoma passed away on Thursday,...

Send flowers to the Henry family.