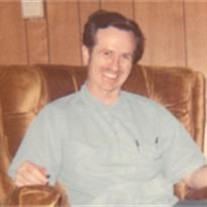 Few women are fortunate enough to share their life with a man who is so selfless, kind and loving as Wallace was; I thank God I was so blessed. And I want to tell you that this quiet, unassuming manâ??s life might surprise anyone who did not know him well: Â Â Â Â Â Â Â Â Â Â Â Â Â Â Â  The Doctor didnâ??t think Wallace was alive when he was born at home, and so he placed him on a stack of newspapers and turned his attention to Wallaceâ??s mother. But Wallace had his own ideas about things even then, and he made up his mind to live. And what a life Wallace had. He was fully supporting himself by the age of thirteen years, working the wheat harvests and rodeos side by side with the adult men. He also worked any odd jobs he could get, including setting dynamite for construction when he was still a young teenager. As a real life cowboy back then he was a crack shot with a gun and drove cattle by cracking a bull whip. He went into the Air Force at age 18 and was assigned the job of medic in crash rescue, as well as hospital orderly. Once out of the service he worked as an x-ray technician, rapidly advancing to administrative positions and then obtained his BA degree. As he told me, â??I looked around the room in a meeting one day and realized I was the only one there without a degree. I knew that was as far as I could go without going back to school.â? Once he did get his degree he was recruited to help establish the King Faisal Specialist Hospital and Research Centre in Riyadh Saudi Arabia where he worked with Lester Skaggs (the Manhattan project) and other scientists. Once back home in the states he worked various positions in hospital administration and then in project management for the Department of Defense. He received awards for his work for the government; one of the awards he received was the TECOM award for saving the government more than a million dollars. He worked in Panama while with the DOD, and while he was there he taught Navy Seals underwater demolition and was made an honorary Navy Seal. I can only scratch the surface of Wallaceâ??s life in the time we have here today. This demolition expert was also an artist with his sketches on the Oklahoma Mason magazine. He was a cowboy working the cutting corrals and he was a deacon in the Church as well as a member of the Masonic Lodge. He was a paratrooper in the service and a master diver in civilian life. He wrapped the hands of professional boxers, acting as their sparring partner at times, yet he was always reading, often with more than one book at a time. He worked in the tobacco barns in rural Georgia and as a diamond courier in the big cities. His work ethic was impeccable, and he not only did his own job extremely well, but he was always there to help his co-workers or anyone else in need. Wallace never got enough of adventure and he traveled to many exotic places, but what he loved most was his family, and he ultimately chose us over his love of adventure. He was a wonderful husband, father and grandfather. And, by the way, Wallace could fix almost anything, from baby birds fallen from their nest to a broken piece of crockery, to fixing a daughter who almost died in a terrible car accident and a second wife who didnâ??t believe in herself. During his life time, Wallace touched the lives of so many interesting people, from Kings to movie stars, to circus acts and spies, from politicians to scientists and more. He took it all in stride, and as he got older and looked back on his life, he loved to tell stories about his adventures. Some may have thought he made up those colorful tales, but I know the stories were all true. You see, Wallace was always honest and truthful; I know from personal experience that if you didnâ??t want the truth it was best not to ask my husband. Â Â Â Â Â Â Â Â Â Â Â Â Â Â  We are here to say goodbye to Wallace today, but I cannot, because he is still with me even now and I will forever hold him in my heart. And while I am devastated beyond words at the loss of his physical presence, I cannot mourn the miracle of this manâ??s life. He was so filled with love and laughter that his smile was always ready to light up a room and touch a heart. I hope all of you will join me in celebrating his life, and I invite those at this service to share their feelings and their memories of my very special and beloved husband, Wallace Franklin Nelson. Wallace Franklin Nelson, 78, died August 19, 2012 in Tulsa, Oklahoma. He was born January 30, 1934 in Rush Center, Kansas, and was the son of Paul A. Nelson and Dallas (Shill) Nelson.Â  Survived by his wife, Delores, son, Wallace Franklin Nelson Jr.,Â daughter, Robin Nelson Patterson, 4 grandchildren, 6 great-grandchildren and a brother, Meryl Nelson.

Few women are fortunate enough to share their life with a man who is so selfless, kind and loving as Wallace was; I thank God I was so blessed. And I want to tell you that this quiet, unassuming manâ??s life might surprise anyone who did not... View Obituary & Service Information

The family of Wallace Franklin Nelson created this Life Tributes page to make it easy to share your memories.

Few women are fortunate enough to share their life with a man...