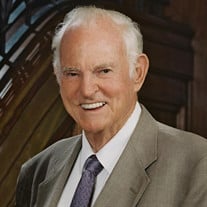 Wallace Oliver Wozencraft, ‘Wally’, of Mannford, OK was born on November 7, 1926 in Ada, Oklahoma to Frank and Kathleen Wozencraft. His work here on earth was completed November 13, 2020 at the age of 94. He grew up in Seminole, Oklahoma and graduated from Seminole High School. He enlisted into the Navy as a Radarman, 3rd Class, in November of 1943 at the age of 17. Was deployed to the Philippines on LSM 336 to operate shipboard radar. Was Honorably discharged in July of 1946. He will forever be known as a member of the Greatest Generation. Upon return to the United States, he married his childhood sweetheart, Francis Preston. He graduated from Oklahoma University with two degrees, one in Architecture, the other in Architectural Engineering. They moved to Tulsa, Oklahoma in 1950. When he joined Boston Avenue Church, he was asked to be the Scoutmaster of their Troop 20; he was in his early twenties. That started a Boy Scout Scoutmaster legacy that spanned 26 years, presenting over 325+ Eagle Scout awards, and growing the active troop membership to 120 boy scouts annually. He created a yearly calendar of 10-mile hikes, a one day 20-miler, an after Christmas 50-mile hike, and annual summer scout camp, plus summer trips like floating the Colorado River in the Grand Canyon. His scouting program touched and molded hundreds of young boys throughout his service. He was awarded the Silver Beaver Award (1960), the highest leadership award given in Scouting. He went on to serve on the Indian Nations Council Board of Directors. At Boston Avenue Church, his family was selected as family of the year in 1963. In his later years, he was a member of Mannford United Methodist Church. Wally received his Architectural License in 1958, joined Black and West Architectural firm in Tulsa where he later became an active partner, eventually becoming the principle owner of the firm. He tirelessly continued to work as an active licensed Architect until October of 2020 at the age of 93. He was a member of American Institute of Architects (AIA) for over 50 years. He is credited for many successful building projects such as: South Tulsa Baptist Church, the Claremore Performing Arts Center, Parkside Psychiatric Hospital, many Broken Arrow Public schools, a rebuilding of John Zink, Garland, and Tom Hale Scout Camps, the Tulsa Boy Scout Service Center, and the local project architect for Tulsa Performing Arts and the BOK tower. He also designed the Floral Haven Cemetery, Post Oak Lodge, AAPG Pratt and Weeks Towers, the Tulsa Co. Court House, and many, many more schools, churches, drug stores, and office buildings. He was an active member of Tulsa Executive Association for many years. He hand-built his own 5,500 sf house on Keystone Lake in the early 1970’s. Wally was preceded in death by his parents, his sister Francis, his wife Fran of 63 years, his son Chris, and his grandson Eric. He is survived by his daughter Claudia (Kathy) Casey and husband Ken, his sons Rick and Tom, and their wives Gina and Gale. Four grandchildren, Jennifer, Jeff, Kelly, and Alex, and six Great Grandchildren Misha, Aiden, Preston, Owen, Jack, and Kennedy. The funeral service will be held at 3:00 PM on November 19, 2020 at the Floral Haven Funeral Home Chapel in Broken Arrow, Ok, with the final committal at the Garden of Reflection at Floral Haven. Visitation will be held from 3-6 p.m. on Wednesday, November 18, 2020 at Floral Haven Funeral Home. ***Services will be live streamed starting at 2:55 a.m. on 11/19/2020. To view the service live, please click on the following link: http://webcast.funeralvue.com/events/viewer/40714 ***Masks are required if you plan to attend the service in person.

The family of Wallace Wozencraft created this Life Tributes page to make it easy to share your memories.

Send flowers to the Wozencraft family.