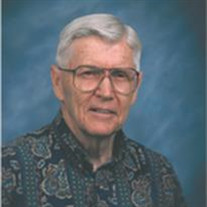 Walter Ray Kelly, Jr. died peacefully, surrounded by family on April 21st at the age of 85 following a courageous battle with chronic lymphocytic leukemia. He was born in Lone Wolf, Oklahoma December 15, 1926 to Walter Ransom Kelly and Reba Holdridge Kelly. Service will be at University United Methodist Church, 10:00 AM Wednesday, April 25th with interment at Floral Haven. There will be a reception at the Floral Haven Family Center from 12 -2 pm. Walt is survived by his loving wife of 66 years, Coriene, his son Stuart and his wife Pam, grandchildren Kristen Donnell and Sara Gilbert husband Grant, great-grandchildren Hannah and Cooper Donnell and Gabe and Wyatt Gilbert; and his daughter Karen Kelly and grandson Clayton Kelly. He is also survived by his sister Dorothy Jean Hinckley, his nieces Deede Cauly, Debbie Dillard, nephews David and Jim and all their children. He was also survived by a host of lifelong friends that meant the world to him. He was preceded in death by his parents and older sister Norma Lea, who passed away at the age of nine. Walt graduated from Will Roger High in Tulsa, Oklahoma in 1945 & served his country during WWII, stationed in Guam. On his return he attended Tulsa University majoring in business & graduating from Denver University specializing in the lumber business. He worked for his Dad at Hope Lumber in Tulsa for many years, then sold wholesale for Broadview Lumber out as Carthage, Missouri. He then went into partnership with his dad and purchased a unique Hardwood company in Tulsa which they ran for many years. He was a lifelong member of the Will Rogers Rotary Club, serving as its president 1966-67, and also was a 32 Degree Mason & member of the Royal Order of Jesters, & also was appointed State Deputy Snark of The Concatenated Order of Hoo-Hoo, a Rather fun lumbermanâ??s association, Promoting health, Happiness, & Long-life, which he certainly enjoyed. Walt dearly loved and was lifelong member of the University United Methodist Church in Tulsa, where he met and married his beloved wife. He also dearly loved the University of Tulsa and was an avid fan and Supporter of the athletic Dept. especially, Football, Basket Ball & Golf. He was an active bowler and Golfer and was very competitive at both. Walt dearly loved & was devoted to his family and many friends and never met a stranger, and he will be deeply missed.

The family of Walter Ray Kelly created this Life Tributes page to make it easy to share your memories.