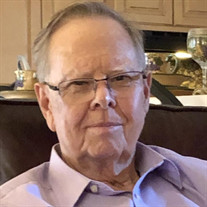 Dr. Wana Tine Archer, 85, father, grandfather, great-grandfather and Baptist pastor, was called from this life to his home in heaven prepared for him by his Lord and Savior, Jesus Christ, on November 22, 2021 in Tulsa, Oklahoma with family by his side. He was born on March 24, 1936 in Muskogee, Oklahoma to his parents, Wana Tine Archer, Sr. and Pearl Ruth Ellington Archer. Wana was a member of the South Tulsa Baptist Church and the Kingdom Explorers Sunday School Class. He is survived by his loving wife, Sammie Lee Archer of the home; son Mark Allen Archer of Sarasota, Florida; daughter Lee Ann and husband Ken Kron of Tulsa, Oklahoma; daughter Julie Gay and husband Kernoal Stephens of Piperton, Tennessee; sister-in-law Donna Jean Brennan of Flat Rock, North Carolina; four grandchildren, Lauren and husband Matthew Dykstra, Jordan and husband Bryan Edmundson, Julia and husband Aaron Petree, and Evyn and husband Philip Tankersley; four great grandchildren, James Dykstra, John Dykstra, Olivia Dykstra, and David Edmundson; also cousins, nieces, nephews, and a host of dear friends. He was preceded in death by his mother and step-father, Willard and Pearl Ragsdale. Wana was raised by his step-father, Willard, from the age of three. Willard was always "Dad" to Wana. He married his high school sweetheart, Sammie Lee Bennett on July 8, 1955. They shared 66 years of married life together. At age 20, Wana was called into the Gospel ministry. His first pastoral endeavor was to establish the Gore Baptist Mission, Gore, Oklahoma, in 1956. It is now the First Baptist Church of Gore, Oklahoma. He continued to pastor for 47 years. He was pastor of churches in Illinois, Ohio, and Oklahoma- the last was a 23 year pastorate of the First Baptist Church of Collinsville, Oklahoma. Wana said about the church, "It was an easy church to come to - a hard church to leave." He was a 1954 graduate of Muskogee Central High School, Muskogee, Oklahoma; a 1963 graduate of Southern Illinois University, Edwardsville Campus, earning the B.S. degree; a 1967 graduate of Southwestern Baptist Theological Seminary, Fort Worth, Texas, earning a master's degree in religious education; and a 1979 graduate of Ohio State University, Columbus, Ohio, earning a Ph.D. degree. His doctoral dissertation was on pastoral leadership effectiveness. Wana also served in the United States Army from 1958-1960. As a hobby, he was an adjunct instructor for Tulsa Community College during the 1980s and 90s, teaching Humanities, Philosophy, Speech, and Geography. He also served as teaching assistant in the Tulsa Metro area for Southwestern Baptist Theological Seminary at the masters level. He was active in the Tulsa Metro Baptist Network, an association of Southern Baptist Churches. He served as Chairman of the TMBN Constitution Committee from 2004-2005. He was active in the pastor's weekly Wednesday Prayer group for many years. Some of his dearest friends were part of this prayer group. While he was pastor of the First Baptist Church of Seminole, Oklahoma Wana served as honorary chaplain of the Oklahoma State Senate. Oklahoma Governor Brad Henry issued a proclamation citing numerous accomplishments of Wana's life work as a pastor. The proclamation added, "Whereas, Dr. Wana T. Archer's service to his fellow man is an example for all, and why life is good in Oklahoma, now therefore, I, Brad Henry, Governor of the State of Oklahoma, do hereby proclaim November 30, 2003, Dr. Wana T. Archer Day in the State of Oklahoma." The mayor of Collinsville, Oklahoma also designated that same day as the "Wana T. Archer" day in Collinsville, Oklahoma. He was an author of four books; "Sermons that Change Lives", "The Answer: Solving the Science-Bible Problem", "James Daniel and the First Christmas", "Advent Edition: of James Daniel and the First Christmas". His Ph.D. dissertation is in the libraries of Ohio State University and Oklahoma Baptist University. After his retirement in 2004, Wana served as Interim Pastor for Woodland Acres Baptist Church in Tulsa, Oklahoma and Faith Baptist Church in Sapulpa and provided pulpit supply for area churches. Whatever he did he always did with his high school sweetheart at his side. There was never a task that he asked her to do that she did not undertake. They set their faces toward the calling God laid on their hearts. They traveled life's journey hand in hand. In his later life, Wana was known to say that his greatest human hope was for the family that he and Sammie had created. He prayed that they might always grow in faith toward God, love for one another, and to forgive as they had been forgiven.

Dr. Wana Tine Archer, 85, father, grandfather, great-grandfather and Baptist pastor, was called from this life to his home in heaven prepared for him by his Lord and Savior, Jesus Christ, on November 22, 2021 in Tulsa, Oklahoma with family by... View Obituary & Service Information

The family of Wana Tine Archer created this Life Tributes page to make it easy to share your memories.

Send flowers to the Archer family.