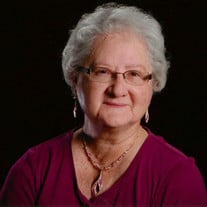 Wanda Faye Cates Ramsey was born April 25, 1942 in Glenpool, OK to Virgil and Gladys Cates. She was raised in Tulsa, OK and attended Will Rogers High School. At age 14, Momma met the love of her life, Tommy Alfred Ramsey Sr. She was sweet 16 when they married in 1958. Momma gave birth to their first child in 1960, son Tommy Jr., and shortly after they joined Daddy in Japan where he was stationed in the US Navy. In 1961 they had their second child, daughter Connie. In 1962, Daddy finished his military duty and they moved to Tulsa. In 1964, Momma gave birth to their third child, daughter Becky, and they thought their family was complete. But God had other plans. In 1972, to their surprise, they had their fourth child, daughter Lorie, which completed their family. Momma was a stay at home parent who was very active in her children's lives. She was involved in their school and extra-curricular activities that included holding leadership roles. Momma was an exceptional seamstress, making most of her and her family's clothes. She was an amazing cook and very talented cake decorator. She later taught herself how to cross stitch, crochet, and knit. But her best talent was giving unto others. After raising her children, she worked at Lake Country Beverages for several years, followed by years of work at Hale-Halsell until she retired in 2002. After her retirement, she and Daddy enjoyed traveling and making memories with their grandchildren. Momma began her journey with Christ in 2000 and was baptized in 2001. She was a member of St. Mark's United Methodist and later First United Methodist in Owasso, where she was very active and involved in many areas of service. In the spring of 2021, she began attending Eastland Baptist Church where she continued to grow spiritually and serve the Lord. Wanda left this earth, peacefully, at her home on December 10, 2021, surrounded by most of her family. She was preceded in death by her spouse Tommy Sr.; parents Gladys and Virgil Cates; brothers Ben and Wes Cates. Wanda is survived by her children Tommy Ramsey Jr (Judy), Connie Smith (Chris), Becky Nelson (Kevin), Lorie Randolph (Matt); grandchildren Ryan and Phillip Smith and Jamye Bizzell, Nicole Nelson and Taylor Pratt, Clayton and Rachel Randolph; six great grandchildren and another one due in May; one uncle Earnie McGuire (Maxine); many nieces, nephews, cousins and a multitude of friends; last but not least, her fur-baby Josie, who has no idea she is a dog. Funeral services will be held at 12:30 PM on Saturday, December 18, 2021, at Floral Haven Cemetery with interment to follow. Viewing will be 4-6 PM on Friday, December 17, 2021. In lieu of flowers the family request donations to be made to the American Heart Association or American Diabetes Association.

Wanda Faye Cates Ramsey was born April 25, 1942 in Glenpool, OK to Virgil and Gladys Cates. She was raised in Tulsa, OK and attended Will Rogers High School. At age 14, Momma met the love of her life, Tommy Alfred Ramsey Sr. She was sweet 16... View Obituary & Service Information

The family of Wanda Faye Ramsey created this Life Tributes page to make it easy to share your memories.

Send flowers to the Ramsey family.