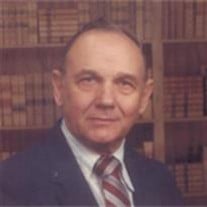 Watts D. â??Dubâ? Barnes, was born in Ardmore, Oklahoma on September 27, 1918 and went to be with His Lord on Tuesday, May 10, 2011 at the age of 92. With the exception of one year, he lived his early years in Ardmore where he graduated from high school. The Depression Years were very difficult for him and his family. While in his teens Dub worked in his fatherâ??s cleaning plant and took whatever extra jobs he could get to help the family survive. One summer he hired out to a hay bailing crew and baled hay all summer for less than $100. To make matters worse he was paid in hay and had to sell it in order to get the money. In his senior year he took three courses which later proved to be the stepping stones to his economic future. They were bookkeeping, typing and shorthand. Graduation was gratifying but also one of the most difficult times of his life. With no money to further his education along with the necessity to stay at home to help in the family business due to his motherâ??s illness he could not envision his circumstances ever changing. In the autumn of 1936 he was frustrated and depressed in regard to his future. His fatherâ??s business was such that he could be spared mornings so he enrolled in Ardmore Business College taking advanced bookkeeping, typing and shorthand. His tuition was paid by bartering cleaning clothes for schooling. One November day the school president advised him that the superintendent of a refinery in Allen, OK was searching for a male stenographer and suggested that he apply. He applied and the job was his. Thus began his long career with Sunray Oil Company, later becoming Sunray DX Oil Company and finally Sun Company, all due to mergers.Â  The next few years in Allen were like heaven compared with prior years. He married his high school sweetheart, Leanna Frances Love, on February 10, 1940. Here they started their family of two children, a daughter, Beverly Love, and a son, Sydney Kent. In 1948 he applied for a transfer to a new, larger refinery at Duncan, Oklahoma and received it. From there he worked for two years for a small oil company in Oklahoma City, then in 1951 he returned to Sun at the home office in Tulsa. He had the privilege to be the Staff Assistant to seven Vice-Presidents at various times. He retired April 1, 1980 at the age of 62 from Sun Company after 43 years with Sun and itâ??s predecessors except for the two years in Oklahoma City. Â  During his life he enjoyed participating in the Toastmasters Club of Tulsa; volunteering at Sequoyah Elementary School with third graders; and serving as a precinct judge during elections. He served on the Board of the Western Sun Credit Union for 15 years. He loved to travel and explore the beauty of America and made it a point to visit all 50 states. Â  Dub loved His Lord above all else, his family and his church. The Barnes Family joined Sequoyah Hills Baptist Church in 1953 where he remained active serving in the past as Sunday School Director, Church Training Director, numerous committees, and serving as a deacon until his death. He referred to his church family as one of the great blessings in his life. Â  He is survived by his daughter, Beverly Love Edwards, of Tulsa and her husband, John; his son, Sydney Kent Barnes, of Oklahoma City, and his wife, Judy; six grandchildren: Dr. Brent Barnes of Oklahoma City and his wife, Juli; Kellie Barnes McFarland of Oklahoma City, and her husband, Greg; Christy Edwards Gammon of Bethany and her husband, Justin; Dr. Chad Preston Edwards of Ft. Campbell, Kentucky and his wife, Becky; Tara Barnes Meyers of Burleson, Texas, and her husband, Blake; Daylon Glen Barnes of Norman, Oklahoma and his fiancÃ©, Sarah Harkness; a step grandson, Dennis McKee, of Sapulpa and his wife, Theresa; and 15 â??treasuredâ? great grandchildren; a brother, Brigadier General Harry Warren Barnes of Tishomingo, OK and his wife, Ernestine, and a brother, Charles Herman Barnes of Tishomingo; as well as a host of other relatives and friends whose lives he touched. Â  A memorial service will be held at 2:00 on Saturday afternoon, May 14, at the Sequoyah Hills Baptist Church, 714 North Harvard. Interment at Floral Haven Memorial Gardens. Memorials can be made to Sequoyah Hills Baptist Church.

Watts D. â??Dubâ? Barnes, was born in Ardmore, Oklahoma on September 27, 1918 and went to be with His Lord on Tuesday, May 10, 2011 at the age of 92. With the exception of one year, he lived his early years in Ardmore where he graduated from... View Obituary & Service Information

The family of Watts “Dub” D. Barnes created this Life Tributes page to make it easy to share your memories.