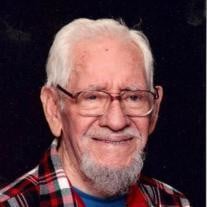 .Wayne Leroy FitzgeraldWayne Leroy Fitzgerald passed away at Northside Nursing Home in Sapulpa, OK on Thursday, November 29, 2012. Wayne Leroy Fitzgerald was born May 7, 1920, youngest of two sets of fraternal twins, last of seven, to Charles Ephraim Fitzgerald and Cata Lee (Zellner) Fitzgerald in Hastings, OK. Moving to Big Wells, TX in 1921 and Young (Pleasant Valley to residents), AZ in 1929 working on the family farm and graduating high school in 1938. While job hunting, he contracted smallpox. When he got well, he hitch hiked and hopped trains all over the country working when and where he could finally signing up with the Civilian Conservation Corps (CCC) in late 1938. While waiting for induction and little work available, Wayne enlisted in the US Navy in the spring of 1939. Still with little work he waited on the CCC and the Navy. In the summer of 1939 he was inducted into the CCC and then sworn into the US Navy on September 8, 1939, as a â??bootâ? sailor. Assigned to the â??Medusaâ?? at Pearl Harbor from June 1940 to December 1941, he learned the precision work of optics, engraving and machining. Because of the war he was transfered to optical school in Washington DC boarding a troop transport December 3, 1941, leaving shortly before the Pearl Harbor bombing, making a frightening pacific voyage to San Francisco. He then traveled cross country to Washington DC. In Washington DC he attended Calvary Baptist Church meeting and later marrying Betty Lou (aka Elizabeth Lorraine) Chamberlain on May 7, 1942 (Wayneâ??s 22nd birthday). They had four children during their marriage: a son Lorin Lynn, an unnamed infant son who died at birth, a daughter Lee Ann and a daughter Leslie Nell. From Washington DC he was transferred to Newfoundland for Optical School where he was promoted to Senior Chief Petty Officer – Chief Specialist Artifices (Optical). After the war, he was transferred to Fort Lauderdale, FL Rangefinder Maintenance then to the January Class of 1945 Rangefinder School in the Brooklyn, NY Navy Yard working on new gyroscopic controlled anti-aircraft gun sights. As Military in New York they experienced many things for free including Broadway Shows. Betty joined the Navy WAVES and the Navy shipped them off around the world. Wayne and Betty were honorably discharged from the Navy in the fall of 1945. In the spring of 1946, with little success finding work, he read a newspaper notice offering re-enlistment to ex-servicemen and re-enlisted in August 1946 taking them again to Guam until his honorable discharge March 8, 1949. Working available jobs — including a Singer trained sewing machine repairman which he enjoyed doing the rest of his life — they enrolled in college, Betty in Education and Wayne in Pre-Med. After their first child, with a family to support, he felt medicine took too long and changed to education receiving a Bachelorâ??s Degree and later a Masterâ??s Degree. During his career he taught in Young, AZ, Brewster, MN and Cottonwood, AZ, and taught all grades, favoring and mostly teaching sixth grade. Taking a break from teaching while in Montezuma, IA from 1968 to 1970 he attended Palmer Chiropractic College deciding after a year it was not for him. Seeing an ad seeking teachers in Guam, they moved with daughter Lee in August 1970 finishing their teaching careers in Guam Public Schools. Wayne continued traveling by whatever transport was available â?? thumb, train, bus, car, air â?? he just loved to go. Highlights being Japan, Taiwan, Australia, Scotland and Bali just to name a few plus crisscrossing this great country he loved. Wayne retired in 1988 visiting friends and relatives until September 1989, when he settled in Sapulpa, OK near his daughterâ??s family. Shortly thereafter meeting Shirley Jackson in the Salvation Army and quickly becoming fixtures in each otherâ??s lives. Wayne was enrolled into the Salvation Army Corps on December 11, 1990 by General Ava Burrows and served as Corps Sergeant Major in the Sapulpa, OK Corps until no longer able. Wayne and Shirley married June 23, 1999; spending the rest of his life as husband, father and grandfatherâ?¦he loved those babies. October 2010, health and ability to cope with daily life declining he moved into Northside Nursing Home in Sapulpa, OK, living peacefully in a caring environment. Preceded in death by: his parents Charles Ephraim Fitzgerald and Cata Lee (Zellner) Fitzgerald, sister Juanita Lindenborn, brother Claxton Fitzgerald, twins: sister Helen Hazlewood and brother Charles Fitzgerald, sister Evelyn Waldrip, an infant son, daughter Leslie Nell Fitzgerald, son Lorin Lynn Fitzgerald and Elizabeth (Betty Lou Chamberlain) Fitzgerald. Survived by: his twin sister Winnie Lee Sparks of Young, AZ, daughter Lee Ann Fanning and husband Nubbin of Sapulpa, OK, wife Shirley Fitzgerald of their Sapulpa, OK home, her sons Ted Graves of Kiefer, OK and Julie, Jon Graves and wife Darla of Kellyville, OK and Joe Couturier of Tulsa, OK also Lori Stotler and Dolith Couturier and grandchildren, great grandchildren, great-great grandchildren, many nieces and nephews and their families and friends to numerous to mention. Wayne was an extraordinary, intelligent, educated, kind, loving man of God! In lieu of flowers, if you wish to celebrate his memory, you may make donations in his name to Salvation Army Corps in Sand Springs, OK. Memorial Service Wednesday, December 12, 2012 at 6:00pm Salvation Army Corps 4403 S 129th W Ave Sand Springs, OK (918) 245-2237

The family of Wayne LeRoy Fitzgerald created this Life Tributes page to make it easy to share your memories.