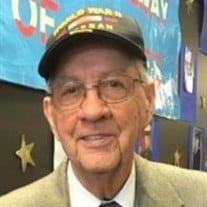 Weaber Neil Geiser peacefully passed away Saturday, December 21, 2019 at The Veterans Center in Claremore at the age 94.  Neil had been a resident of Broken Arrow, OK.Neil was born June 25, 1925, in Shamrock, OK., to Carl “Fred” and Hattie (Weaber) Geiser.  Upon graduating Oklahoma City Classen High School in 1943, he was enlisted in the U.S. Army to serve in WWII. He proudly served his country in Europe (England, France, Holland and Germany) from 1943 – 1946.Upon his safe return to the United States, Neil attended Oklahoma University and in 1948 he married Shirley Ann (Hall) Geiser.  They were blessed with a beautiful daughter, Shanna Sue.Later, Neil joined GMAC (General Motors Acceptance Corp.) as Accounting Manager and moved to Tulsa as a single father. He had a successful career of 38 years with GMAC.  After coming to Tulsa, Neil met the love of his life, Estelene (Herrington). They were married in 1955 and they were blessed with two children, Carla Ann and Michael Alan. The successful blending of his two loving families was one of his greatest accomplishments.Neil loved to sing and was part of the chorus in high school.  He was particularly proud to be selected by one of his teachers to complete special testing that allowed him to become part of a select group for a charter school in Norman, OK.Neil loved to fish, play golf, bowling, and dominos.  Neil and Estelene loved to play bridge and enjoyed a weekly bridge game with friends.  When Neil moved to Broken Arrow he especially enjoyed playing bridge with friends at the Broken Arrow Senior Center.  As he was able, he enjoyed attending church at Asbury United Methodist Church where he was a member.Neil was preceded in death by his parents, his brother, Carl “Freddie” Geiser, wife, Shirley Geiser and wife of thirty years, Estelene Geiser.His surviving family includes his children, Shanna Houston and husband Terry of Centennial, CO.  Carla Hanes and husband Keith of Broken Arrow, OK.  Mike Geiser of Columbus, OH.  He is also leaves behind six grandchildren and eleven great grandchildren.Neil was proud of his service in WWII and Services will be held at 2:00 pm Friday, January 24, 2020 at Ft. Gibson National Cemetery. The family requests in lieu of flowers, a donation be made to your favorite charity, if you choose.

The family of Weaber Neil Geiser created this Life Tributes page to make it easy to share your memories.