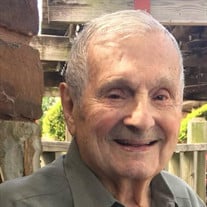 Wendell R Cook passed away peacefully on July 4, 2021, after just celebrating his 92nd birthday 6 days prior. He was the most kind hearted, father, grandfather, husband, son and brother was born in Stillwater to Lela & WO Cook. Wendell grew up in Cushing, OK, graduated Cushing High School then attended & graduated from Oklahoma A & M, now Oklahoma State University in Stillwater in mechanical engineering and aerospace. He later attended MIT, working on his Master’s degree in Boston while working a full time job and raising his four school age children with Suzanne. Wendell met his forever love Suzanne while attending OSU and they married shortly after his college graduation. Wendell had a distinguished career which spanned the late 50’s through 70’s which included working on design teams for the pioneering of the NASA missiles and space program. His talent required Wendell to move the family more than 10 times over these years. which included assignments in Colorado, Texas, Massachusetts, Pennsylvania, Michigan and returning to Oklahoma. When he returned to Oklahoma in 1974 he changed his career path from aerospace to Housing and Urban Development where he traveled between Oklahoma City and Tulsa Once they became empty nesters and all the girls were living on their own, he started his own Century 21 Real Estate office in McAlester OK, which was in operation for the next 15+ years. He always managed to stay very involved in the business related organizations and clubs too numerous to list. Wendell retired in the early 90’s when they made their final move to Tulsa to be closer to family. During the last year of their daughter Kerri’s life, both he & Suzanne were caregivers. Kerri died at a very young age of breast cancer. Their hearts were broken to lose a daughter with a small child at such a young age. Wendell later became his mother’s care giver, then again his wife’s primary care giver for a long emotional journey with her Alzheimer’s and lung cancer. Suzanne passed away just several weeks after they celebrated their 60th wedding anniversary. Over the years this incredible man provided for his wife and the four daughters and gave them an outstanding life and childhood. He was always there for the family, and willing to participate & be active if needed. He was the most brilliant, hardworking man with an engineer’s brain and attention to detail like none other. His artistic ability was recognized by all. He was also a loyal OSU Cowboy Fan and OSU Alumni member. For the last 40 years Wendell adored attending sports and alumni activities which included the entire family on many of the activities. He was active with Komen Race for the Cure, Relay for Life & the American Cancer Society, and the weekly support groups connected. Over the past 70 plus years he was always involved in his church. He was a longtime member of Kirk of the Hills Church and as of recent when he moved to Broken Arrow, started attending The Assembly of Broken Arrow. Wendell is survived by his 3 daughters, Lyn Baske of Broken Arrow, Nanette Cook and spouse Jane Hughes of Grapevine, TX, and Jan Hazen and the grandchildren Michelle Hazen & spouse Jack Crotchett, & great grandson Jack William Walker Hazen, Adam Hazen and Christian Hazen all of Austin, TX and Amy Chapman Terry of Kingwood, TX He was preceded in death by his wife; Suzanne Taylor Cook, daughter; Kerri Chapman, son in law; Bill Hazen, sister; Elaine Binkley, and parents; & WO & Lela Macy Cook. In lieu of sending flowers the family would appreciate a memorial gift in the form of a contribution to the “Wendell Cook Memorial- Go Fund Me”. Your donation will be used to purchase a memorial bench in the courtyard garden at-Forest Hills Assisted Living Facility where he lived the last several years. It will have a plaque honoring the memory of Wendell Cook from his many friends and family” If you have any questions on the Go Fund Me donation, please email or text Nan Cook at [email protected] or 817.980.2336 for details or questions on your memorial gift. MEMORIES LAST ONLY IF YOU SHARE THEM. WE ASK THAT YOU SHARE THEM Please share a memory below, as comforting words from you would mean a lot. Please post your most treasured memory of Wendell. This will show our family your support by a shared story or personal message or memory, or meaningful photo or video, or record a video message using your webcam. On behalf of the family, we sincerely encourage you sharing your personal experiences and preserve the memory of Wendell for future generations to come. Our family will then have time to record and have visual hard copies for the Celebration of Life Memorial. Our Celebration of Life Memorial is pending at this time. If you leave name and email address, the family will send a "save the date" of if preferred leave phone number and text message will be sent.

Wendell R Cook passed away peacefully on July 4, 2021, after just celebrating his 92nd birthday 6 days prior. He was the most kind hearted, father, grandfather, husband, son and brother was born in Stillwater to Lela & WO Cook. Wendell grew... View Obituary & Service Information

The family of Wendell Ray Cook created this Life Tributes page to make it easy to share your memories.